In a sign that the market for wearable devices remains nascent, China’s Xiaomi has risen from nowhere to become the industry’s second largest company responsible for one-quarter of all shipments in the first quarter of this year.

That’s according to new data from IDC, which ranks Fitbit top of the tree with 3.9 million shipments in Q1 2015, that’s more than double its previous year and 34.2 percent of the current market. Xiaomi came in next with 2.8 million shipments — 24.6 of the market — ahead of Garmin (6.1 percent), Samsung (5.1 percent) and Jawbone (4.4 percent). IDC noted that Pebble and Sony narrowly missed out on featuring in the top five. 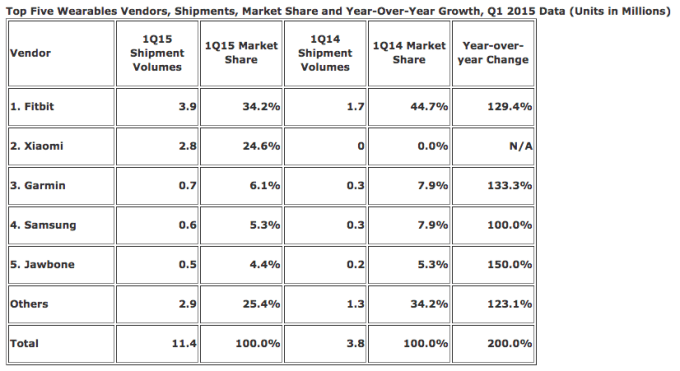 This data is, of course, pre-Apple Watch. Although IDC estimated that total wearable shipments increased by 200 percent over the past year, most observers expect the release of Apple’s device in April will kickstart greater awareness and more sales of wearables — although it remains unclear exactly what growth we can expect to see.

Either way, don’t expect the players in this chart to rank consistently while the wearables industry is nascent enough for a new entrant to gobble up 25 percent so quickly.

Xiaomi didn’t rank last year (in Q1 2014) because its first wearable — the supremely cheap $14.99 Mi Band — wasn’t unveiled until last summer. Initially available in China, it can now be purchased in Xiaomi’s seven markets in Asia and — courtesy of a recent extension of its Mi.com store — the U.S., UK, France and Germany.