New Cisco CEO, Chuck Robbins, unveiled his new executive team in a blog post today, and he’s favoring diversity and youth as he tries to sell Cisco to a new generation of customers.

He’s got a challenge.

But as he moves in and former CEO John Chambers and members of his team move on, Robbins is already putting his own unique stamp on the organization, hiring five men and five women to lead his executive a team, a move that already makes Cisco unique in Silicon Valley.

Robbins seems to recognize that to push his company forward in the face of an increasingly competitive market landscape, he needs new ideas. 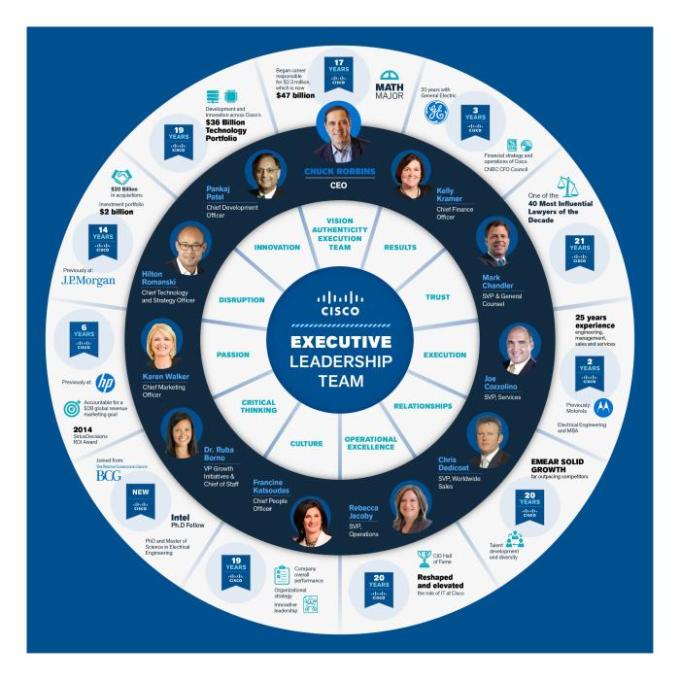 “I think he’s done a great job mixing it up not just on gender diversity, but also on ethnic, cultural and expertise,” Ray Wang founder of Constellation Research told TechCrunch.

The company is also shrinking its executive team from 13 to 10 as Robbins looks to build a smaller team than his predecessor with a flatter organizational structure, according to The Wall Street Journal. The previous team also had five women.

The youngest of the new faces is Ruba Borno, 34, who has been hired as vp of growth initiatives and chief of staff. She comes to the company from Boston Consulting Group and has a  Ph.D. and a Master of Science in Electrical Engineering.

Cisco reports that Hilton Romanski, 42, will be taking on the role of chief technology and strategy officer, the role previously held Padmasree Warrior. Re/code first reported she was leaving the company earlier this week. She has actually agreed to stay as a strategic advisor through September.

Cisco faces pressures on a number of fronts. As a traditional networking hardware company, customers are beginning to move big chunks of their computing and networking from the data center to the cloud. Meanwhile companies like Google, Amazon and Facebook that require tools and equipment that can handle tremendous scale, are building their own data centers and designing their own networking equipment, creating a squeeze for the company.

It is hoping to pivot to the internet of things, what the company calls the internet of everything, and is also looking at the cloud, particularly the OpenStack. Just yesterday, it bought Piston, one of the early OpenStack startups. Last fall, it purchased Metacloud, another OpenStack startup. Cisco makes a lot acquisitions like these in many areas, and is also trying to encourage young startups with their Cisco Entrepreneurs in Residence program.

Robbins is betting that by going with a younger, more diverse executive team, he can can catapult his company forward and avoid the specter of disruption that large technology companies like his are trying so hard to avoid.