Ebay today is expanding its professional selling service known as eBay Valet, where select, pre-approved Bay sellers will handle listing, selling and shipping items on consumers’ behalf in exchange for a split of the sales. The service will now accept high-end clothing, the company says, marking eBay’s desire to compete with a growing number of e-commerce sites and online marketplaces that help consumers sell their high-quality, secondhand fashion items, including apparel and accessories.

Today, there are dozens of these services, including sites like The RealReal, ThredUp, Poshmark, Twice, Threadflip, Tradesy, and more. Many of the shops focus on higher-end brands, as this allows them to better grow their revenue even with fewer sales than a behemoth like eBay.

Now eBay will compete with these sites head-on through eBay Valet. The company says that its “valets” will begin to accept designer labels, including brands like Gucci, Tory Burch, Ralph Lauren, Burberry, Kate Spade, Marc Jacobs and Lululemon. The expansion is also being launched in partnership with fashion blogger Garance Doré, who’s providing tips on what and how to sell. 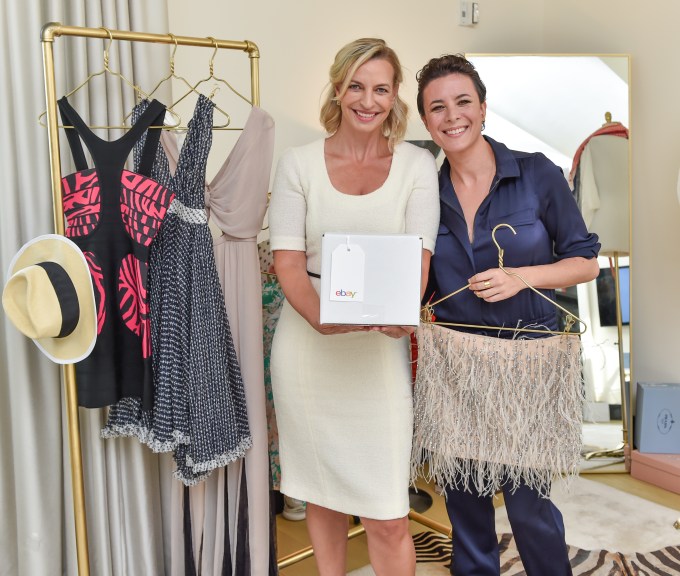 Previously, eBay Valet supported items like electronics, collectibles, shoes, handbags, and other items that could fit in a free box eBay shipped to your house.

The service originally grew out of eBay’s then lesser-known eBay Sell For Me service, when it launched under the “eBay Valet” brand on iPhone last summer. The idea was that many potential customers don’t bother to sell on eBay because it’s a hassle. Ebay Valet, however, does the work for you. With the iPhone app, consumers take a photo of the item in question, enter or speak their item’s description, then wait for a response from a valet. The valet will tell you the item’s estimated selling price and then you can choose to receive a free, prepaid box which you can fill with the things you want to sell. 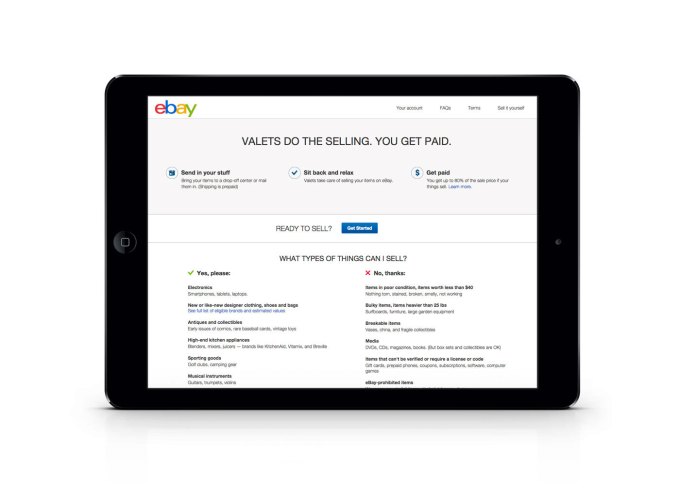 The valet will then photograph the items, list them on eBay, handle running the sale and shipping to buyers. When the sale is finalized, you keep 70 percent of the profits. I’ve personally sold a number of used electronics on eBay Valet and found the process easy and profitable enough to try again.

However, at the time of eBay Valet’s launch, neither Sell For Me (which is now also called eBay Valet) via the web nor the Valet app supported clothing sales. That changes today, and eBay has also published an extensive list of accepted fashion brands and their estimated values.

Consumers can get started selling via eBay Valet online, where they can request a shipping label and enter in their personal information, plus product details. The mobile app, which can also send you a free box, hasn’t been updated on the App Store. But upon testing, it too, has already been updated to support clothing sales.

Ebay Valet’s expansion comes at a time when a number of these alternative resale marketplaces have been seeing growth and taking in new investment. For example, The RealReal added another $40 million in outside funding in April, and Poshmark raised $25 million more that same month. These sites are still just a fraction of so-called “re-commerce” sales when compared with eBay’s marketplace. But they are making dents – for instance, The RealReal is on track for $200 million in revenue this year. Meanwhile, some reports claim that eBay sees $2 billion to $4 billion in luxury goods sales annually.

The success of eBay Valet is still undetermined, however. The company, which declined to share metrics on number of users, valets or sales, still refers to the program as a “pilot.” The company is still testing the mail-in service and is also trialing a drop-off option in L.A. and Atlanta.