Facebook can be painfully slow on weak network connections or prohibitively expensive on stingy data plans that are common in India, Africa, and Southeast Asia. So today, Facebook is launching a bare-bones, low-resolution version of its Android app that works well on crummy networks or outdated phones, and burns much less data than its normal smartphone apps. It will roll out today in Asia, and come to parts of Latin America, Africa, and Europe in the coming weeks.

Facebook Lite is designed specifically for the developing world to help the social network on-board its next billion users. Facebook Lite doesn’t offer data-intensive features like videos or Nearby Friends. But if users are willing to accept that and lower-resolution image thumbnails, they can access Facebook quick, smooth, and cheap from the most remote corners of the planet.

You can watch a quick video demo of Facebook Lite below:

Feet On The Ground

From the top-of-the-line smartphones, LTE networks, and unlimited data plans of Menlo Park, California, you might not think anything was wrong with Facebook. But it’s nothing like where most of Facebook’s users live, and certainly not where its will need to look to reach the 2 billion user milestone.

“Roughly a year back, that’s when we realized that our current Facebook experiences needed a lot more work, specifically in emerging markets and more specifically where networks are bad” Facebook Lite’s product manager Vijay Shankar tells me. So Facebook set out on two parallel paths. First, it would try optimize its flagship apps to load faster with less data. It’s already shrunk down its main Android app.

Second, Shankar tells me “We floated another idea. What if we were building this from scratch for emerging markets? How do we completely re-architect this?” 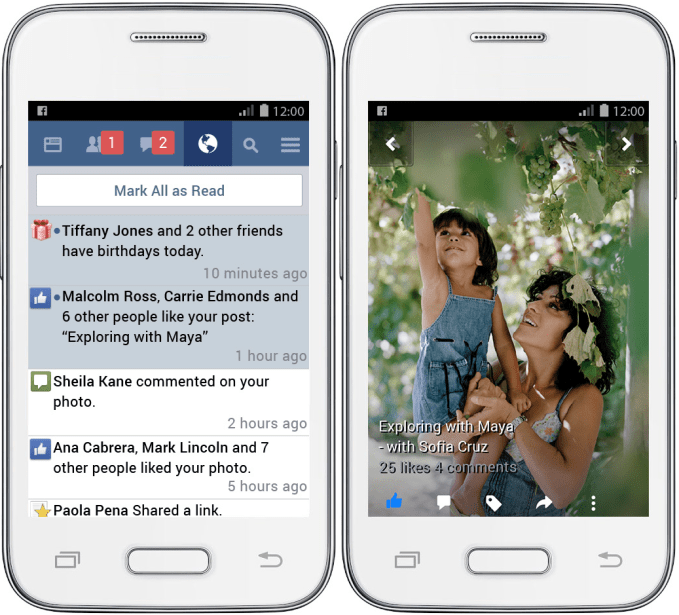 Rather than imagine what the problems in these areas were, Shankar says “we did a lot of research on the ground and spent a lot of time in Africa, and India and Indonesia.” The team discovered the solution would need three things:

Facebook’s been chasing the developing world for years. A half decade back it launched Facebook Zero, a text-only version of Facebook subsidized by carriers as a way to convince people they wanted the Internet. Facebook acquired Snaptu, which had helped it build a feature phone app for the developing world, which it then renamed Facebook For Everyphone. 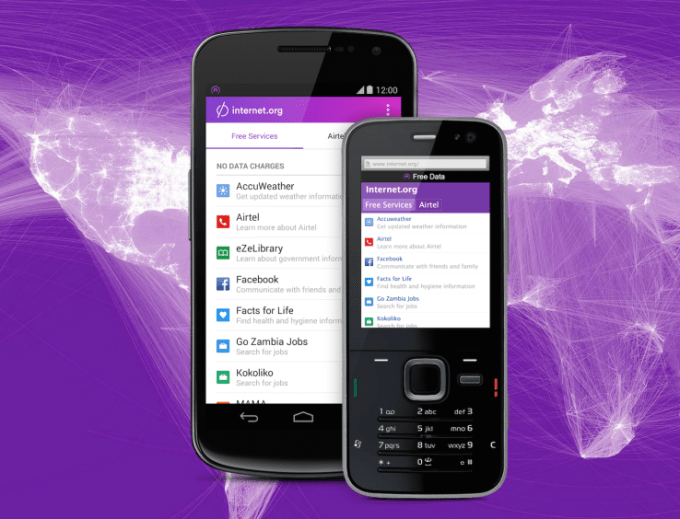 It’s also launched the Internet.org app, which provides carrier-subsidized free access to a limited set of “basic Internet services” including local health and civic information, news, Wikipedia, and Facebook and Messenger. Carriers hope a free taste of the Internet will inspire people to buy data plans, but Internet.org has encountered criticism that picking and choosing what services are free goes against Net Neutrality.

But Facebook can’t get carriers to pay for everyone’s free Internet access, so it’s trying to make it as cheap as possible for users to pay for it themselves. After 6 months of work, Facebook shipped its first version of Facebook Lite in January to a few countries like Bangladesh, Nepal, and Nigeria, which TechCrunch writer Darrell Etherington spotted.

Shankar says since then it’s received almost 50,000 reviews on the Google Play store and received a 4.3 star average rating, but a lot of the reviews are just people ask when it’s coming to their country. They want it so bad that he says “some people are getting their hands on the app in other countries by getting creative on the Internet”, implying usage of VPNs to trick Google Play into letting them download.

Today, Facebook Lite begins its official global rollout. At under 1 megabyte in size, Shankar says it can be downloaded in seconds for cheap on even slow 2G connections. I played with it for a few minutes, and was surprised by how slick and full-featured it was despite the compromises. 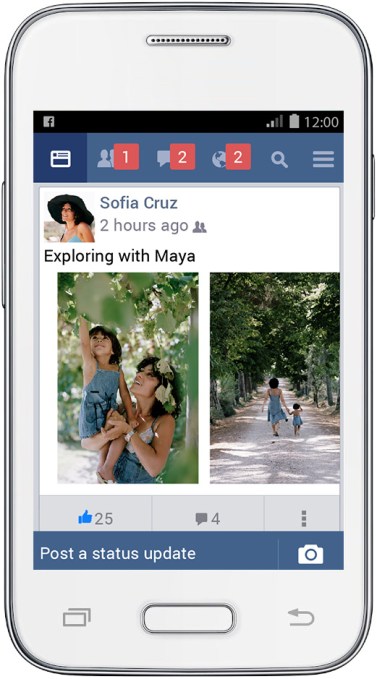 The main way Facebook makes the app use less data is by never pre-loading full-resolution images. Photos and link preview thumbnails in the News Feed appear a bit grainy at first. They’ll load in full-res if tapped, but Facebook only wants to do those big data pulls if people volunteer for them. If you try to post a photo to Facebook Lite, the app compresses the image and then sends it in the background, so its small and you don’t have to spend the wait time staring at the screen.

“Every roundtrip to the server is painful” Shankar says, so “we’re very careful about what features and experiences we offer in the app.” There will be some ads, but several of Facebook’s top formats like app install ads won’t be in Facebook Lite. Advertisers might not love the idea of their creative assets being compressed into low-res. But otherwise, users would probably scroll past them before they even load.

Years back, Facebook tried to cut corners on shipping multiple version of mobile code by building its iOS and Android apps as wrappers around a single HTML5 website. Now it’s swung in a different direction, forking entirely to build a whole codebase just for low-bandwidth connections.

Shankar says Facebook thought hard about the issue, but decided the billions of potential users were definitely worth the extra effort. “Adding multiple interfaces to the main Facebook experience is something we’ll have to maintain for years to come.” Facebook isn’t taking this new commitment to the developing world…lightly.