Following Pinterest’s unveiling of Buyable Pins — a way for merchants to sell things that users can buy directly within Pinterest — I had an opportunity to sit down with the company’s general manager of monetization Tim Kendall to talk a little bit more about it.

The first thing he made clear was that, for now, brands will not be able to promote Buyable Pins. To be sure, around two-thirds of the content on Pinterest is made by businesses, but those businesses are going to have to rely on organic traffic to drive sales for their products for the time being. Around 87 percent of Pinterest users have bought a product after discovering it on Pinterest, Kendall said.

“This isn’t an ad offering, it’s an experience for pinners,” he said. “Pinners tell us, ‘I discover great things from Pinterest every day, I stumble across it, I wish I could buy it on Pinterest without leaving — it’s about addressing that pain point. Basically we’ve been told for five years, it’s the No. 1 request from pinners. For partners it’s a way to reach customers already on Pinterest, sell products but continue to own the customer relationship.” 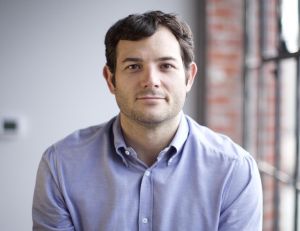 Still, Kendall left the door open for it as a possibility in the future: “It’s not an advertising offering — we hope to offer that at some point but we did not announce that.”

Like any feature, users are going to have to slowly be introduced to how it works. Kendall said during the development process, not much about the design changed, but as things often work in design, “If you look up there and it seems simple and elegant it was really hard to get there.”

“It was pretty similar to what you saw today,” he said. “Blue?” he said after a pause — which I’m guessing is referring to what the color of the button should be.

Once Buyable Pins launch later this month on the iPhone and iPad, Pinterest will walk users through how it works, much like other new features it rolls out. Users will either have to enter a credit card number or use Apple Pay, and they’ll still have to enter their address once.

But the company was trying to figure out a way to make it have as little friction as possible, because the drop-off in conversion to a sale between desktop and mobile devices is around 75  percent, Kendall said. Around 80 percent of Pinterest’s users access it through mobile devices.

Right now, new merchants will have to go through Shopify or Demandware in order to get their products for sale on Pinterest. Kendall said tens of thousands of merchants are already working through those platforms. While it’s partnered with big retailers like Macy’s, that’s still likely the fastest way to get products on Pinterest that users can buy right away.

If a Shopify merchant opts in to placing Buyable Pins on Pinterest, those existing products that have been pinned on Pinterest will become available for purchase. And for those products not on Pinterest, the company adds them to its corpus of pins, Kendall said. Otherwise, that retailer will have to do some kind of a direct integration, and right now Pinterest isn’t creating a sort of platform that any merchant or retailer can use to add Buyable Pins to Pinterest.

“We’re gonna continue to build those solutions that make this as easy as possible for as many partners as possible,” he said. “But we have nothing specific to talk about yet.”

Still, this is another step that could convince more merchants to put content on Pinterest. The more content there is on Pinterest — and users are surprisingly tolerant and accepting of business content, unlike many platforms — the more pins there are for pinners to search out and discover. And if they’re able to buy things on Pinterest, they’re more likely to come back to buy things, giving advertisers more of an opportunity to get other ads in front of those users.