Pinterest unveiled what it’s calling “buyable pins” at an event at its headquarters in San Francisco today.

Here’s how it works: Rich Pins — pins which have much more information than a normal link, such as the ingredients for a recipe — will get a new button that allows users to purchase things directly from partners that it’s working for. Users will see prices, be able to select specific types of a product (like the color), and then they can tap the button to buy the product. That item then arrives at the user’s door.

Buyable Pins will launch later this month. Pinterest is working with Stripe to handle its payments, and working with companies like Braintree and Apple to “make sure Pinterest never touches credit card information.” There is no fee for buyers and merchants, the company said. It’s launching Buyable Pins with Shopify and Demandware at launch.

“Right now since everyone uses their phone, but it’s still a pain to buy things,” Pinterest CEO Ben Silbermann said at the event. “There are fiddly menus, you have to squint to see the images.”

Buyable Pins show up in all of Pinterest’s features, like recommendations and search. Users can pay with a credit card or with Apple Pay. Pinterest has partnered with retailers like Macy’s and Nordstroms to stock Pinterest with “millions of products,” as well as working with tens of thousands of local brands and merchants, Silbermann said.

The company has certainly been busy in the past few months. Pinterest in May launched a new service that helps marketers craft better pins in order to help them perform better. Its Marketing Developer Program gives marketers a series of tools — like pin scheduling and optimization in the form of APIs for companies that post branded content across a variety of channels — that would help marketers grow their presence on Pinterest organically. It also launched its first video ads and created more granular pricing options for advertisers. 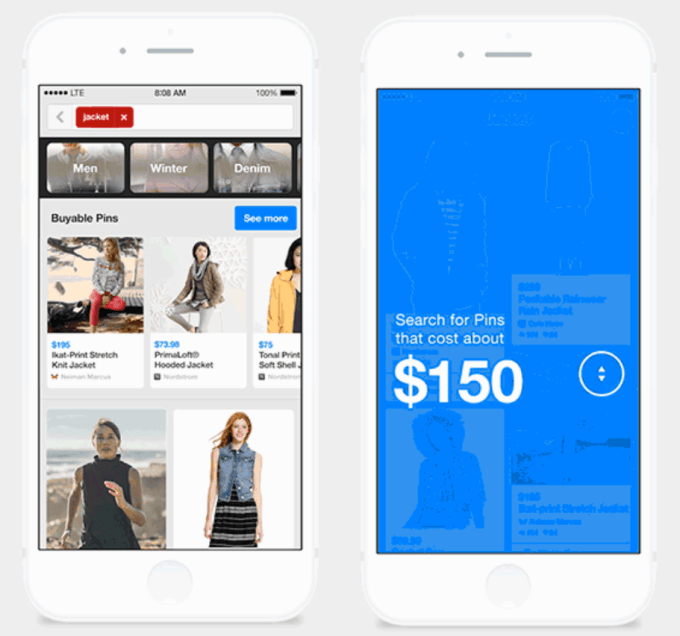 Pinterest also said it would finally open up its platform to third-party developers last month, a move that developers have been waiting for since launch. But Pinterest, as always, has been very conservative about the way it rolls out these new features. Its developer platform, for example, is only available to a small number of developers that have to apply to be able to get on the platform. For example, a Pinterest user may be able to order the ingredients of a recipe on Pinterest through Instacart through the Pinterest platform.

All this put together shows how the company, which for a long time was entirely focused on its core product, is quickly justifying its $11 billion valuation to investors. Pinterest, among advertisers, is seen as a gold mine because it is more future-facing than other services with a large number of users. People go to Pinterest at what marketers call the entire “funnel” — where they visit to gather ideas, are actively looking for something through search, and finally actually make a purchase or visit a site.

Pinterest has also begun building out its playbook to grow internationally. In May, we took a deep look at its Jumpstart program, an experiment the company is running where it sends several employees to a new country in order to ramp up the service natively to that country. Right now that experiment is running in Japan, but will expand it to other new countries if it works out to be successful.