Thync is launching its mood-altering headset today, letting you find a state of calm or boost your energy with controls on your smartphone.

As we reported back in October, the Los Gatos-based startup has raised $13 million to change your mood using electrical stimulation. Unfortunately, we weren’t able to try on the headset (or even see it) when the startup was ready to talk about its financing.

That’s no longer the case. During a recent visit to Thync’s beautiful offices (they’ve renovated an old opera hall), I got to strap the startup’s mood-altering wave generator to the ol’ noggin.

As it turns out, Thync’s gadget is more of a module than a headset. It’s small, plastic, and contains a Bluetooth radio for connecting to your phone. You attach it to a disposable adhesive strip, which you apply to your temple and neck. 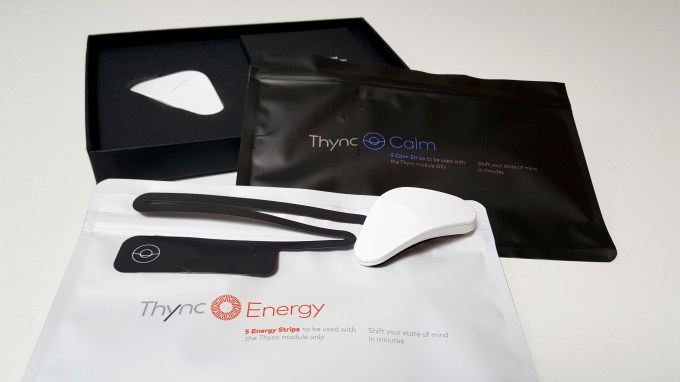 When you open Thync’s app, it quickly connects to the module and then lets you choose between two emotional states: calm and energy. Once you begin, you can dial the intensity of the experience up or down, giving you control over just how mellow or excited you’ll be at the end of a session.

During the demo, Thync co-founder and CEO Isy Goldwasser explained that the module wasn’t directly stimulating neurons in my brain (that would be too damn weird for me to try, to be honest). Instead, it uses tiny pulses of electricity to stimulate the skin at your temple, which then activates the instinctual fight-or-flight response in your brain to indirectly affect emotional response.

In use, you get a wavy, tingly feeling on your upper forehead and the front of your scalp. It’s not unpleasant, but it would definitely take a few uses before it stops feeling weird.

While I was warned that Thync might not work the first time, a few minutes into my first session (using the Calm setting) I felt a wave of sluggishness pass over me. I had some difficulty putting words into a coherent question for Goldwasser, and felt a strong urge to take a nap that lasted until I got home. While I may have cranked the settings too high for my first go, the impression I got was that it would be great for falling asleep, not de-stressing at the office.

I didn’t have time to try out the Energy mode, but if it works as effectively as the Calm mode, it should make users wired. I could see myself using it to get that initial boost of energy needed to get to the office and started on work that coffee gives today. At its $299 launch price, those who buy Starbucks or the like every day might have found that use case making some monetary sense, though the need for $20 replacement packs of the disposable adhesive strips after five to fifteen uses — and the Borg-like visage of having the module strapped to one’s forehead — might turn potential users away for now.