Apple quietly made a number of changes to the way it features and organizes mobile applications in the iTunes App Store in May that are of particular interest to mobile game developers. Previously, developers relied on algorithmically generated sections highlighting new and trending titles as a way of having their games found, but now many of these lists are gone.

Now missing are lists like “New,” “What’s Hot,” and “All iPhone (Free & Paid),” for example. In their place, including for the first time ever in the Games’ subcategory pages, are editorially curated lists instead.

The removal of the “All iPhone (Free & Paid)” section was likely in part due to abuse on the part of app developers, as a number of publishers listed their games with “AAA” or “AAAAA” or other “A” words in order to show up first. That seemed to be an odd strategy since it’s unclear how many consumers will willingly download an app with a title that appears so spammy. But just as with the phone book in years past, there are always those businesses who believe that simply being at the top of a list is the key to success. 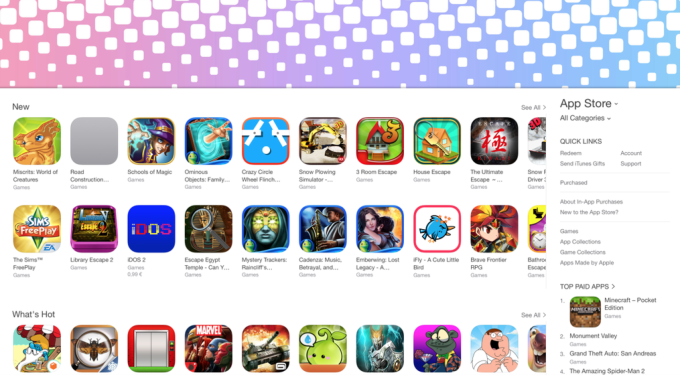 An old version of the App Store

The now-removed new release section was not alphabetical, but appeared to have been based on download volume, as not every new app made the cut. However, the section did give indie developers a shot at organic app downloads if they could acquire a lot of traffic within the first few days following their app’s debut.

Going forward, it seems that Apple is moving away from these algorithmically derived and more automated lists. Today, the App Store’s Games section instead features lists like “Best New Games” and “All Time Greats,” which are created by Apple editors and refreshed on a weekly basis. These are featured alongside previous launched lists like “More Games You Might Like,” which is a personalized list based on your purchase history. 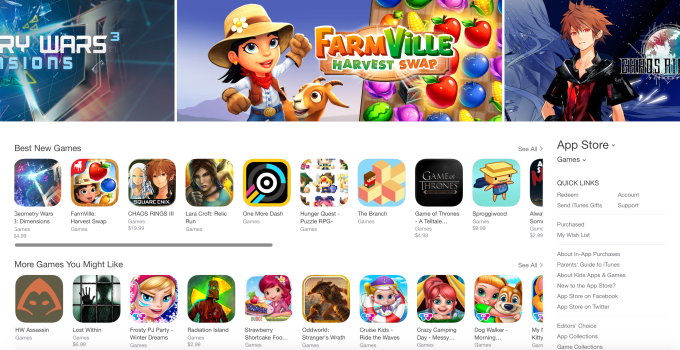 These pages now have their own banner art at the top as well in order to better highlight the best new games within those sections. Within each subcategory page, consumers can browse editorial collections, including “Best New Games,” “All-Time Greats,” “Free,” and “Pay Once & Play.” 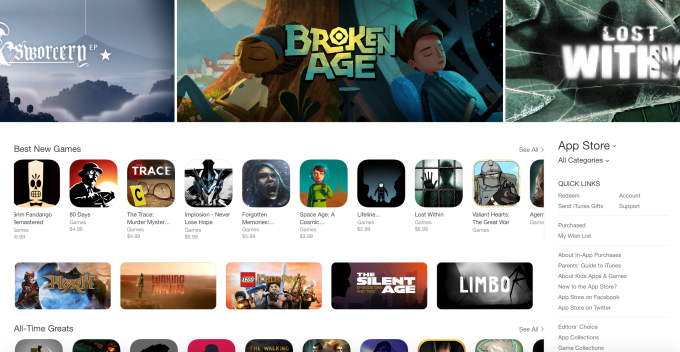 To what extent these changes have impacted app developer varies, but a handful reported substantial drops in organic downloads, ranging from 30 percent to as high as 90 percent, during the first week after launch. Discussing the matter on private forums, developers have even reported seeing launch day numbers drop from ~1,000 downloads per day to just 100.

That being said, for a majority of app developers, the removed sections won’t have a significant or lasting impact on app downloads, especially for those who have made more of an effort to focus on being discovered through App Store search, or have more refined user acquisition and marketing strategies.

More importantly, the editorial sections mean those developers who build great games will be rewarded for doing so, instead of having to compete against an inscrutable algorithm.

It also means that developers who have tried to make a quick buck with scam apps, clones and other rip-offs won’t have as easy a time at being discovered thanks to the shift to curation. As you may recall in the post-Flappy Bird era of the App Store, a number of developers shot to the top of Apple’s charts with ridiculous apps, like that one featuring a bouncy ball that was nothing more than a GameSalad template, for example. Apps like these are less likely to be featured by editors, so less likely to rise in the charts and then go viral.

The changes, which hit the App Store in mid-May, are currently only being seen in the U.S. market. They’re a part of Apple’s ongoing efforts to showcase more curated content in the App Store, as opposed to highlighting broader categories of apps. For the company, it’s a necessary shift in strategy as the store continues to fill with new apps – Apple reported this January its store now features over 1.4 million apps, up from a million in late 2013. It may update those numbers again at its forthcoming WWDC event this month.