A new report released today shows the continued domination Netflix has on North American Internet traffic patterns. According to broadband networking company Sandvine, which periodically releases its findings on web usage, Netflix now accounts for 36.5 percent of downstream traffic on fixed networks during peak evening hours, which is up from the 34.9 percent reported in the second half of 2014 . In addition, the study found that HBO is also seeing some growth, thanks in part to the launch of its new, over-the-top streaming service HBO NOW and the popularity of its “Game of Thrones” program in particular. 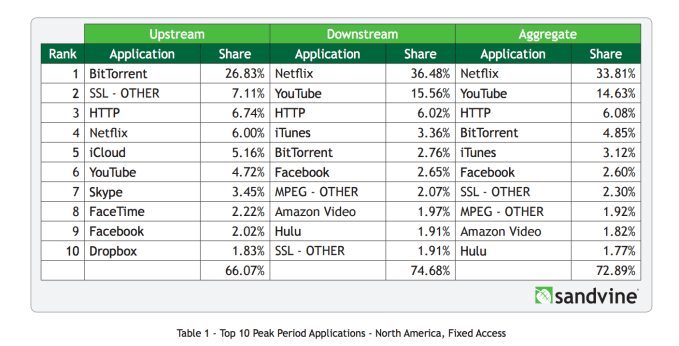 During the season five premiere of “Game of Thrones,” HBO’s two streaming properties, HBO GO and HBO NOW, accounted for 4.1 percent of traffic on one U.S. fixed network – an increase of over 300 percent of their average levels. (HBO GO is the streaming service offered to pay TV subscribers, while HBO NOW is the recently launched standalone service designed to appeal to cord cutters.)

Before the launch of HBO NOW, HBO GO only accounted for 1 percent of downstream traffic in the North American region, an earlier report stated. But as of today’s report, HBO GO accounts for 3.7 percent of HBO’s traffic share while HBO NOW only accounts for 0.7 percent of peak downstream traffic. Sandvine says this doesn’t mean that HBO NOW’s impact is minimal, but is rather related to the recency of its launch and its still-limited access. (It’s only available via Apple products and select cable providers, like Cablevision).

It’s important to note, however, that Sandvine is measuring HBO traffic only on one network during a Sunday broadcast, which is a bigger traffic day for HBO. In other words, the data on HBO’s traffic growth is preliminary – Sandvine says a full report on HBO is expected later this year.

Of course, HBO’s “Game of Thrones” has made headlines for being one of the most pirated television shows ever, even breaking records further into its fifth season this year as the sixth episode saw as many has 3.5 million users downloading the show on peer-to-peer file sharing sites.

However, Sandvine notes that overall BitTorrent (file-sharing) traffic is declining, and today only accounts for 6.3 percent of total traffic in North America and 8.5 percent of Latin American traffic.

Other streaming video services are also seeing more modest increases. For example, Amazon Instant Video still only holds a fraction of the bandwidth when compared with Netflix, but its traffic is growing. A year ago, the service had 1.90 percent of peak downstream traffic – now it’s at 1.97 percent.

Elsewhere, YouTube still has a sizable traffic share with 15.56 percent of peak downstream traffic. Hulu accounts for 1.91 percent of peak downstream traffic, and newly launched over-the-top cable service Sling TV accounts for less than 1 percent. However, Sandvine notes that Sling’s service launched only a month before data was collected, so it may be too soon to truly understand its potential impact.

Across North America, real-time entertainment is the most popular mobile traffic category with social networking apps coming in second. YouTube is also popular on mobile, with 21.2 percent of peak downstream traffic up from 17.7 percent in the first half of 2104. 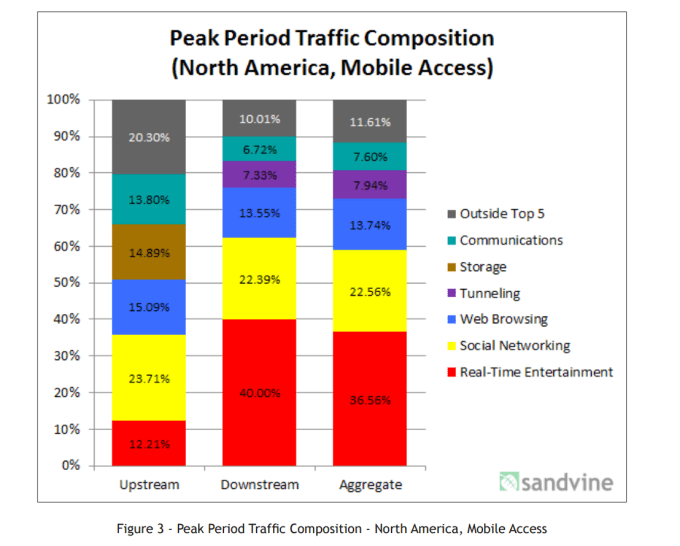 Facebook’s traffic share has been increasing over the past 18 months as well, thanks to the addition of auto-playing videos which caused an average of 60 percent more Facebook consumption per user. 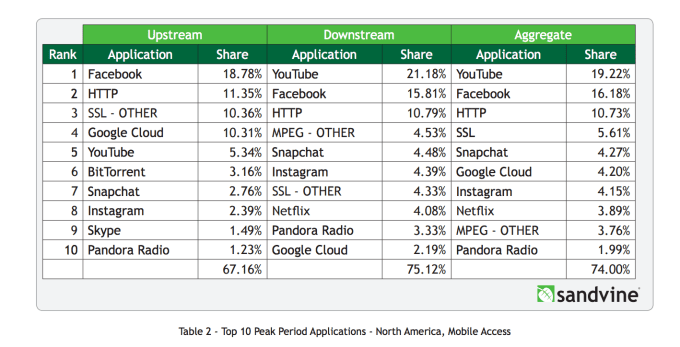