Apple says today it has a fix in the works for an odd software bug that has been able to crash users’ iPhones when they receive a text message with a specific string of characters. The bug, which involves having users send a string of symbols and Arabic characters to a victim’s iPhone, was first surfaced by the online community Reddit, but news of its existence has now spread around the web.

According to the MacRumors blog, sending this text string to a user’s iPhone causes the device to crash and then quickly reboot. Afterwards, if the Messages app was opened in list view, it will continue to crash when you try to open it going forward. If it was opened to the conversation view, however, the app will open. But when you try to enter in another conversation, the Messages app will crash again. 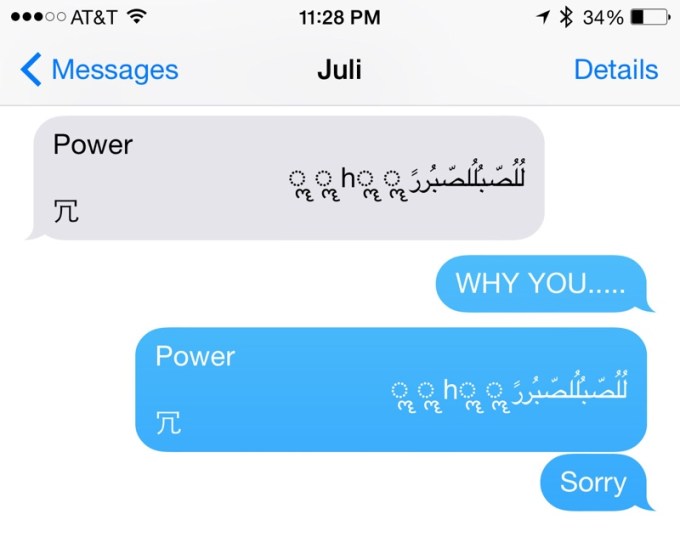 So far, a few possible solutions have been suggested, including sending a reply message to fix the problem. Affected users can send another message to themselves (which you can do via Siri or by sharing from within another app, like Photos), or having another person send you a message instead. After you’ve done this, you can go back into the Message app and delete the conversation. AppleCare support reps are also able to help with the problem, and have reportedly been telling customers that the company is working on a solution.

Not everyone seems to be affected by the bug, which implies that it could be associated only with certain iOS versions and/or a combination of settings which cause the crash to occur. Apple did not explain what was causing the bug, but a Reddit user speculates that it’s related to how banner notifications process Unicode text.

This is not the first time iOS has been compromised by a bug that’s capable of crashing iPhones by way of a text string. In 2013, others had discovered a text string that could crash Safari, and this also caused the messaging app to crash.

The Reddit user, who goes by “sickestdancer98,” also noted that this bug has been around since iOS 6 but had not been patched.

Until the fix is released, you can prevent your iPhone from becoming a victim to this attack (or prank if you have super great friends) by changing your settings. You can go into “Settings,” “Notifications,” and then “Messages,” and uncheck the “Show in Lockscreen” option while also turning off banner notifications.

According to an Apple spokesperson, “we are aware of an iMessage issue caused by a specific series of Unicode characters and we will make a fix available in a software update.”

The company did not elaborate on when that fix would arrive.