Following the bell, Workday reported the results of the first quarter of its fiscal 2016. The company lost $0.02 per share during the period, using adjusted metrics, on revenue of $251.0 million. Investors had expected the company to lose an adjusted $0.08 per share on revenue of $245.0 million. In its sequentially preceding quarter, Workday had top line of $226.3 million.

The company, up a fraction during regular trading in a down market, is down a sharp 5 percent after reporting its financial performance.

On a year-over-year basis, Workday’s revenue grew 57 percent. The company had profit, employing normal accounting methods (GAAP), of negative $61.56 million during the quarter. That works out to a loss of $0.33 per share. On an adjusted basis (non-GAAP), Workday had a fatter operating profit of negative $2.1 million.

Why the company’s shares shed 5 percent of their value following an earnings beat isn’t immediately clear. The firm guided for revenue of $270 to $274 million in its fiscal second quarter. That matches investor expectations of $272.39 million. The company’s growth rate, presuming that it meets its targets, will slow to 45 to 47 percent on a year-over-year basis.

It could simply be that investors hoped the company would beat expectations by a larger margin, and impress with its forward guidance. In-line is lovely, but when your company is valued on growth, sometimes meeting expectations can be akin to missing. Workday ended the financial period with around $1.9 billion in cash.

The market reaction to the quarter was fast, and sharp. The chart is all you need: 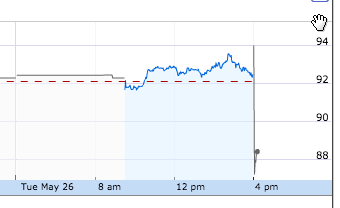