A leaked internal link on Walmart.com accidentally unveiled more details regarding the retailer’s forthcoming three-day shipping service which aims to challenge Amazon Prime. For starters, we now have a name: it’s called ShippingPass. During the brief time the link was live, shoppers were able to sign up and even place orders using ShippingPass, and were able to see which types of items were included in the new program, as well as which geographies ShippingPass served, among other things. They also found that the service would include free shipping on a number of items beyond those that could ship in three days’ time.

Walmart says the sign-up link was part of its internal alpha test, and was not meant to be distributed. The price of the service advertised on the internal site – $1 per year – is also not the expected pricing. As the new waitlist page now shows, unlimited shipping will be $50 per year when it goes live.

Walmart has since emailed those external testers who managed to sign up over the weekend to apologize and explain, additionally crediting them with a $50 eGift card due to the confusion. (See full email below). 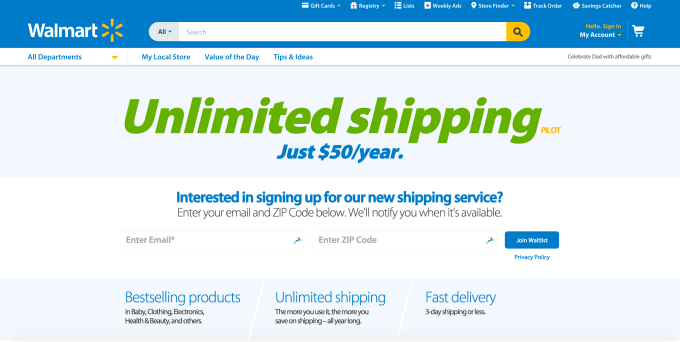 Walmart’s plans to unveil its own unlimited shipping service were revealed earlier this month, and were described as a pilot program meant to collect user feedback and determine consumer interest in a shipping program. The service will run alongside a number of other e-commerce experiments at Walmart, including those featuring online ordering with curbside pickup as well as home delivery options, both of which are available only in select U.S. markets.

Similarly, the ShippingPass website explained to customers via its FAQ that the new service would only be available in limited geographies to start due to pilot testing. It didn’t detail which states or cities would be first to launch, but did note that Alaska, Hawaii, Puerto Rico and other U.S. territories would be ineligible, as would customers with P.O. Boxes in the continental U.S.

The FAQ also noted that three-day delivery was only guaranteed when orders were place by noon your local time. For example, if you order by noon on a Monday, your package would arrive by Thursday.

Additionally, Walmart had previously hinted that the items that could be shipped via ShippingPass would be easy to find on the Walmart.com website, and the leaked link revealed how that’s the case: items will be identified on the site with a ShippingPass badge across a number of product categories, including Baby, Clothing, Electronics, Health & Beauty and more.

Free Shipping With No Minimums, And A Prime Pantry Competitor

One of the more notable discoveries from the leak is that ShippingPass will also offer subscribers free shipping on a number of items beyond those that are eligible for the three-day shipping option itself. Explains the website, “select products” will ship for free within a 4-6 day time period.

Currently, Walmart requires customers to order $50 or more to receive free shipping, so this could be a big draw for those customers who are more concerned with savings over speed when it comes to online shopping.

In fact, during the time the ShippingPass sign-up was accidentally live and being shared across a number of online forums and deal-finding sites, subscribers were able to add some grocery items to their cart under the “free shipping” option. For instance, one tester ordered a box of cereal for $2.00 and it was due to arrive in 4 days, without any shipping charges. Another ordered a fruit punch mix for $2.00 and also received free shipping.

The website confirmed that there would be no minimum basket order required for ShippingPass.

Though ShippingPass is only meant to challenge Amazon Prime’s main benefit, this “no minimum” feature combined with free shipping on various grocery and household items means that Walmart’s service could compete more directly with Amazon’s Prime Pantry.

Prime Pantry, as you may be aware, is a benefit for Amazon Prime members which lets you order everyday essentials, including groceries, household items, personal care items, baby care items, pet care items, beverages, health items, and more, by filling up a “Prime Pantry box.” However, Amazon charges members a flat $5.99 per box. Because of this fee, the service makes more sense as an alternative to the monthly grocery store visit, rather than just a convenient way to grocery shop online.

Of course, as a still to-be-launched pilot program, the details around product selection could change between now and when the service goes live to beta testers and, eventually, U.S. consumers, if the trials prove successful.

ShippingPass’s accidental testers also noted that the subscription had been set up to auto-renew annually by default, though this can be disabled in the settings. The service was available to testers on the website and mobile website, but not Walmart’s native mobile application. However, the company noted on the site, “we are working on getting this up and running soon.”

Here’s the full email sent to testers who came across the leaked link:

Whoa! Was that unlimited shipping for a year for $1? Well, the truth is that you found a link to an employee-only test of our unlimited shipping program. Unfortunately, this one isn’t yet ready for its public debut; because we want to test and make sure it’s up to snuff. You might have seen in the press that we are in the midst of planning a pilot of free, unlimited shipping for just $50 a year. So here’s the deal…we’re going to add you to the waitlist for an invitation to the pilot AND we’re giving you a $50 eGift card that you can use to buy that special something you’ve been thinking about. Oh, and we’ll refund your $1 subscription. Anything you already ordered will be on the way with no shipping charge. We’re sorry for the confusion on this one.

Please look for a separate email within the next 24 hours that will include your eGift card.

Walmart’s investments in e-commerce played a role in its missed earnings earlier this month, alongside other initiatives, including its plans to raise the minimum wage for its employees. However, the company did note that its e-commerce sales had grown 17 percent globally and mobile traffic was up over 100 percent for the quarter. It expects these investments, including perhaps ShippingPass, to pay off in 2016.