The impending sale of Nokia’s Here mapping division has put a sharp focus on the role that location and maps in particular are playing in the mobile world. And while we are seeing a number of big names emerge as potential Here suitors — they include the likes of Baidu, Uber, Facebook and more — an upstart in San Francisco is hoping to provide its own viable — and, it believes, superior — alternative.

Mapbox, developers of mapping and location data based around the open source-based OpenStreetMap and some other clever sourcing, is launching a free SDK for mobile app developers to use as a replacement for a native mapping system simply by replacing a single line of code.

It is launching today for iOS, and, in the words of Mapbox’s CEO Eric Gundersen, “The APIs are an exact match with (Apple’s) Mapkit, making it dead easy to switch.” He calls iOS Mapbox’s “beachfront,” but adds that the SDK will also be coming to Android “soon.”

For now, Gundersen says that pricing for the new SDK will be free for up to 50,000 monthly active users. “For now” is the operative phrase here. “Honestly we are not sure how best to charge for MAUs, so we just figured ‘Hey, let’s launch this and open up a conversation with developers to help us guide how we should change,'” he says.

One thing that Mapbox doesn’t intend to do is launch its own consumer-facing app to potentially compete with those developers.

In other words, Mapbox positions itself in that still-new category of location provider-as-asset, a place where companies like Waze grew its business, and where other startups like Foursquare — which has also made a play as a provider of detailed location (but not mapping) data — also hope to find market value longer term.

But it won’t be building customer-facing services of its own to get there. “We are never going to have an app,” Gundersen says. “We are just going to power the location part of other apps.”

How Mapbox arrived at where it is today

Up to now, Mapbox has made a name for itself as a provider of highly detailed maps that are able to call out different kinds of detail from what you might get in a typical native map from Google or Apple — for example, topography that takes into account not just the direction of a road but whether it goes up or downhill — useful for planning walking or cycling routes, for example. Up to now a lot of this has been integrated into apps through more lengthy projects.

Now Mapbox will be offering four different styles — in addition to terrain, also very detailed streets and light and dark styles for those who want to overlay text, with an option coming soon for designers to build their own styles on top of the raw data as well. All are built using video game graphics technology and render at a fast 60 frames per second.

In the backend, Mapbox also provides a dashboard — illustrated below — that shows how people are moving around using Mapbox-powered apps. This in turn gives them the ability to drill down and see popular neighborhoods and other trending location-based data.

Apple’s big decision in 2012 to build its own mapping service, replacing Google, has seen a lot of criticism thrown at the company for how well it has handled that not-small task up to now.

Apple has made several acquisitions to add more talent to its own location and mapping pool; it is renewing key contracts with mapping data providers like TomTom; and is still looking to hire many more to fill more roles in that area; but there is still a lot of work to do.

Gundersen is openly scornful of how well Apple risen to the task so far, which he believes has created an opportunity for companies like his.

“Apple isn’t just bad at maps, it’s not taking location seriously,” says Gundersen. “Apple’s analytics looks like Google analytics — in 2007. Our maps are not just better and beautiful. Every developer should know how people are using their apps.”

In addition to using OSM in its mapping data, Mapbox has been working for some time on other ways of getting more specific and accurate information.

While companies like Google, Apple and Nokia use roaming physical vehicles to help record location data for their services, Mapbox has developed a different, software-based approach to build its dataset.

It’s somewhat similar to how public WiFi networks become repositories of location-based information. Drawing on a network of devices that have installed apps from some 5,000 platforms — existing paying Mapbox customers include Foursquare, Pinterest, Github, Evernote and the FT — it strips out everything except for mapping data and uses that to continue to enhance its basic dataset.

“Our maps get better as people use them,” Gundersen says. “Data is aggregated and anonymized as it’s collected, and helps us make a better maps by adding new roads, showing traffic, best set estimated times of arrival and more.” It does this with a pretty hardline approach to privacy and transparency that it worked on in collaboration with the EFF.

But interestingly, alongside this, Mapbox is also thinking of the hardware mechanics behind picking up this kind of data. Specifically, Mapbox has been working on ways of being able to source and deliver location information without draining phone batteries — one of the main reasons why often location services get turned off.

“We spent months hacking the shit out of iPhones,” Gundersen says. “I don’t even want to admit how many we broke in testing.”

Even if that cost may work out to be a relatively high line item for Mapbox (the startup has raised to date only around $10 million from the Foundry Group and the Knight Foundation), Gundersen contends it’s nowhere near the expense of doing things the older way that the bigger companies still use.

“Nokia HERE is just doing it wrong,” he says of how the company’s mapping division,  now up for sale, constructs its dataset. “They are spending over a half a billion dollars a year driving cars around and processing that data. That was how you made a map 10 years ago — like back when you had these little Nokia dumb phones. These guys don’t understand the idea of building for mobile and building tools for developers — if they did they would be able to get real time data streams back and have a better map. The future is about open data, great tools for developers, and real time data from users that feed back into a better map.”

All may be true, but what will be interesting to see is whether longer term developers will be interested enough in the extras offered here, or newly inspired by them, to either make the switch from an existing map API or create new apps altogether.

On the side of the platforms, for now Apple, Google and others are flexible about whether developers use their own native maps or those of others in apps. But as the value of gathering and providing location data grows, it’s worth wondering if that kind of open-minded approach will continue, unfettered. 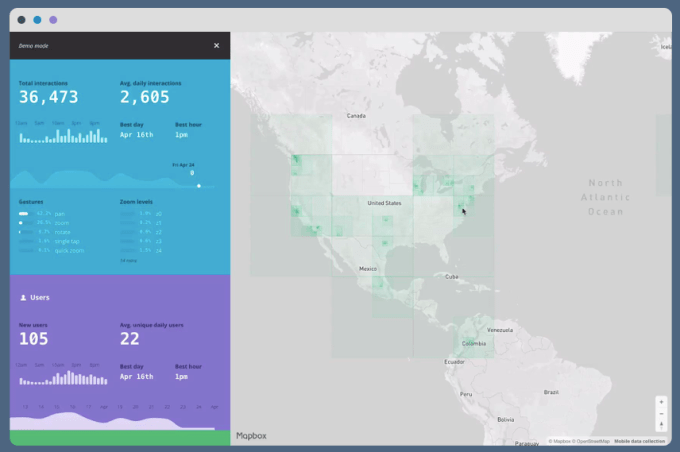