Spotify’s press event today wasn’t just about adding video and other content types. The company also revealed that it’s adding new features to improve the experience for anyone who listens to the app during their runs.

To do that, Chief Product Officer Gustav Söderström said Spotify will now use the sensors on your phone to detect the pace at which you’re running. Then, when you hit the running man button in Spotify, the app uses your tempo to select the right tracks. And if you want to change the tempo, Söderström said, “We’ll find the right music for that, again and again and again.”

Even more impressive, he said Spotify is working with musicians (including Tiesto, who made a brief appearance at the event) to create specific tracks for running. After all, he noted that when his team talked to runners, they said that when the right song comes on, it makes them “feel like a hero.” But that effect only lasts for about a minute and a half, and then wears off — at least until the next song comes along. 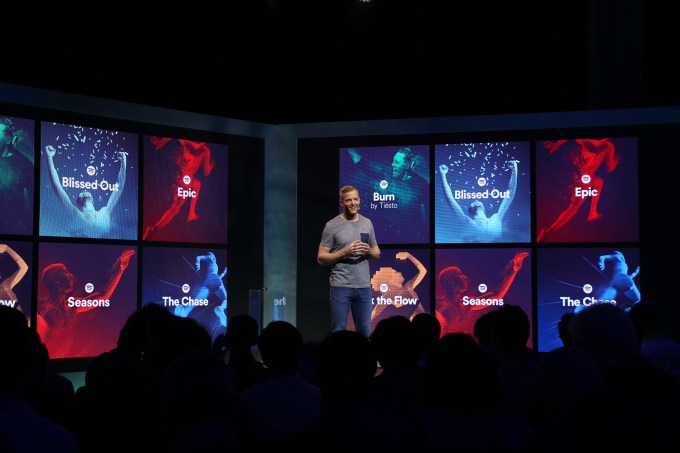 So Söderström wondered why that high couldn’t last for the entire run. To achieve that, these new tracks will actually adjust mid-song. This isn’t “simple beat stretching,” he said: “The composition itself seems to rearrange to fit your current pace.” Spotify has created six of these “experiences” so far, and he said “each of them have their special characteristics.”

All of these features, Söderström said, were developed in consultation with runners and fitness experts. And yes, that means actually going on lots of runs, which is why he bragged, “I likely have the most fit product and design team by now.”

The company also announced partnerships with Nike and RunKeeper to integrate the new Spotify running experience later this year.