Salesforce today reported adjusted profit of $0.16 per share on revenue if $1.51 billion in the first quarter of its fiscal 2016. The market had expected the SaaS firm to report $0.14 in adjusted, per-share profit on revenue of $1.5 billion.

Shares of Salesforce are up around 3 percent in after-hours trading, a gain that is tempered by the firm’s 1.85 percent decline in regular trading.

For the current quarter, the second of its fiscal 2016, Salesforce expects revenue of $1.59 billion, generating adjusted profit of between $0.17 and $0.18. The market currently expects $1.59 billion in top line, and a similar $0.17 in per-share, non-GAAP profits.

The quarter is a beat for Salesforce, though not a big one. The company highlighted its run-rate growth in its earnings release, with its CEO, Marc Benioff saying the following:

Salesforce has surpassed the $6 billion annual revenue run rate faster than any other enterprise software company, and our current outlook puts us on track to reach a $7 billion revenue run rate later this year.

A $7 billion run rate implies fourth-quarter revenue of $1.75 billion, or around $250 million more than in the now-past period. Salesforce’s revenue grew 23 percent in its most recent quarter.

On a non-adjusted (GAAP) basis, Salesforce earned a slimmer $0.01 per share, not discounting for certain costs, like share-based compensation. The software firm ended the quarter with $731 million in cash, up 54 percent from the year-ago period.

For the full fiscal year, Salesforce expects revenue of between $6.52 billion, and $6.55 billion, numbers that it calculates to include $175 million to $200 million in “FX headwind.” In short, the company is taking a hit, as is nearly every U.S.-based tech shop that sells abroad. The strong dollar can hurt revenue growth, given that top-line earned overseas converts more weakly into dollars. And, if you report your earnings in dollars, you get the friction.

All told, it seems that Salesforce is on solid footing. The company’s growth rate could pick up a few points, but given the dollar’s current march, that seems unlikely. Here’s the raw math: 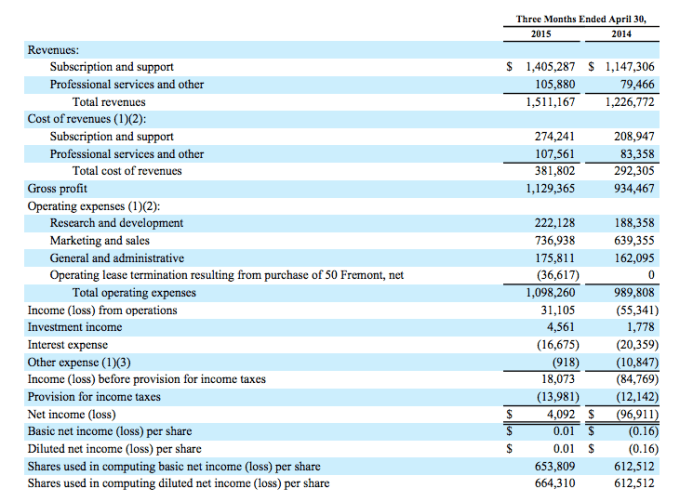