Shares of Yahoo, a company known for its venerable brand, former search market share, and current attempt to become a key mobile shop, fell sharply at the end of trading today. Off more than 7 percent in regular hours, Yahoo took a dive after reports surfaced that the IRS may change how it taxes spinoffs.

That matters for Yahoo, a company that has plans to spin-off its stake in Alibaba, a valuable Chinese e-commerce play in which it purchased a large interest for $1 billion years ago. The company retains a large quantity of equity in Alibaba, shares that are now liquid following the latter firm’s public offering.

According to Bloomberg, an IRS employee “said on Tuesday the government agency is considering changes to rules concerning spinoffs.” If the changes impact Yahoo’s strategy to spin its Alibaba shares into a separate company, or in any way lowers the value of that equity, Yahoo is itself worth less. That’s the gist of the drop.

Yahoo’s move to spin out the Alibaba shares, a multi-billion dollar transaction, had tax advantages. Speaking as only myself, I’ve presumed that the plan was a decent way to allow Alibaba itself to acquire more of its own shares, without penalizing Yahoo on a tax basis. Now, there is less certainty concerning the first transaction, let alone the second.

The original Alibaba deal has been key for Yahoo, providing its shares with a stable value base as the company reinvented itself. Under the tenure of current CEO Marissa Mayer, Yahoo has ignited its mobile user base, but its revenue scorecard has been flat. If Yahoo cannot derive as much value from its Alibaba shares, the company could have less room to continue its turnaround strategy or execute large acquisitions to bolster mobile efforts.

I reached out to Yahoo about the news, and will update this post if I hear back.

Regardless of what the IRS chooses, this is not how you want to close out your trading session: 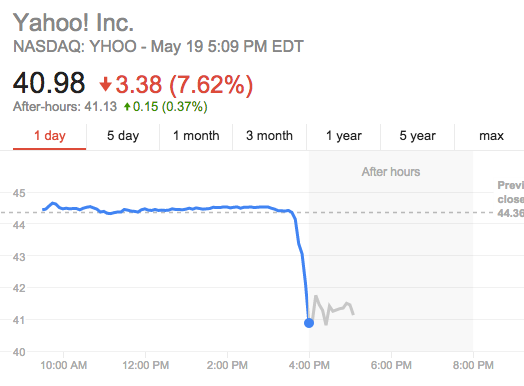