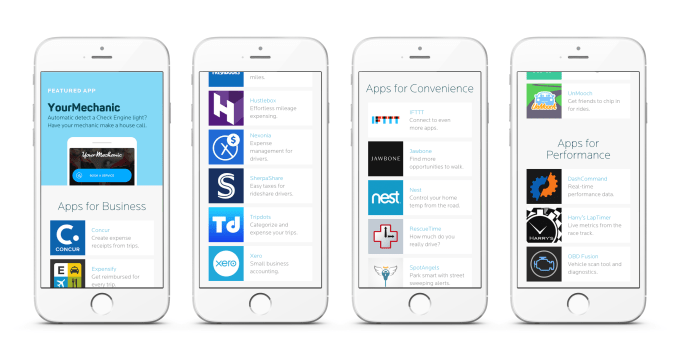 Automatic, a startup whose sensor-and-software combo has been described as “Fitbit for your car,” is today rolling out a software development kit and new hardware that turn your car into a platform for apps.

The company has partnered with more than 20 third-party app developers for the first wave of applications pulling information from its adapter, which has been updated to accommodate streaming real-time data from a car’s computer and sensors to apps running on your phone.

The apps draw relevant data from a car’s computer via the OBD port, letting you do things like feed the exact mileage from a particular drive into Concur to expense a work trip or to a consumer-centric app like Unmooch to split the cost of fuel with friends. There are also apps for those looking to get peak performance from their cars, offering up stats on engine output and lap times.

Drivers for on-demand services like Uber, Lyft, and Postmates will be happy to hear that SherpaShare is one of the first apps to makes it into Automatic’s App Gallery, which points to corresponding apps on iOS and Android’s respective app stores. The app is designed to help drivers determine their actual income taking fuel costs and time spent waiting around into account. Estimating those things with the app on your smartphone was a boon before, but now with data from Automatic, drivers will have exact numbers on the fuel burning while waiting for another fare.

Owners of the existing Automatic adapter will have access to most of the apps available in the App Gallery, though the few apps that offer real-time data to your phone will require the new model, which is up for sale today for the same $99 as the last generation. After a demo last week, Automatic CEO Thejo Kote told TechCrunch that the new adapter is shipping today, so we should have a video review of the new hardware and apps shortly.