One of the 549 million people who use WeChat each month? Based in China? Expect to see more ‘sponsored’ content inside your in-app news feed because parent company Tencent is gearing up to increase monetization of the popular messaging app.

The company began testing advertising inside Moments, the app’s social network-like feed where users share photos and links with friends, earlier this year. Now it has confirmed that it will ramp up its efforts and expand the program this year.

That means more advertisers — Tencent said it experimented with a dozen initial partners — and more ad formats too.

“We will progressively expand the number and range of advertising formats as we move through the year,” Chief Strategy Officer James Mitchell said on an investor call following the company’s Q1 2015 financial results. “Advertisers are very happy with results of the first sequence of ads.” 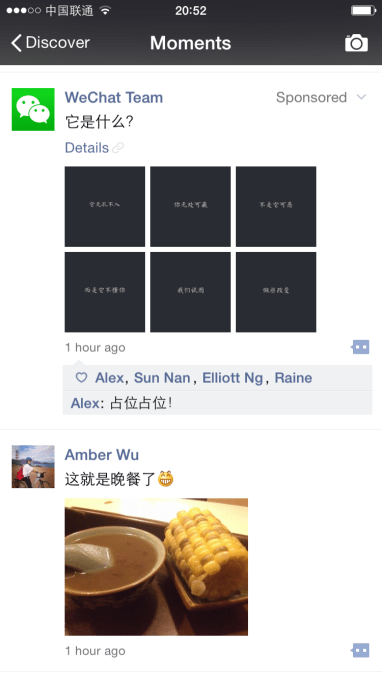 Via Tech In Asia

The move is significant for a number of reasons. Unlike basic messaging apps like WhatsApp, WeChat — which is known as Weixin in China — does a lot more than facilitate text messages and calls between friends.

The app is hugely popular in China, and that makes its social feed a particularly prized canvass for advertisers.

There is, of course, naturally a concern that advertising can ruin the user experience. To that, Mitchell said that an important component is making each ad “interesting enough that users will share it.”

Tencent seemed to do a good job here initially. Moment ads actually became a viral story in their own, as friends used the advertiser matched against their profile as a sign of their value as a user.

That said, the company did admit that it still has the opportunity to improve the overall experience for both users and advertisers.

In-app advertising is important for Tencent because it offsets a reliance on mobile games. Though gaming is still a huge chunk of Tencent’s income — it accounted for $2.15 billion of its $3.647 billion revenue in Q1 2015 — it can be a fickle niche, as the Chinese firm discovered when it missed its earning target in Q3 2014. Plus, with WeChat user growth slowing, new revenue generation initiatives are important.