The augmented reality startup DAQRI, which is working on a HoloLens-style AR helmet and already offers a number of AR software tools, today announced that it has acquired ARToolworks, the company behind the popular open-source ARToolKit libraries. As part of this acquisition, DAQRI will now make ARToolKit’s commercial Pro tools available for free under an open source license. The company says it will continue to invest in ARToolKit, too. 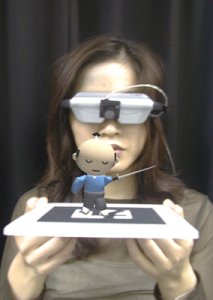 ARToolworks was one of the first augmented reality companies on the market. It was founded in 2001 to offer commercial service for ARToolKit. It now owns a number of AR patents and is widely used by AR developers all over the world.

“There’s definitely a lot of value in the team and the IP, but we are even more inspired by what it could do for the industry as a whole,” DAQRI founder and CEO Brian Mullins told me when I asked him about the rationale for the acquisition. “A chance to reignite the idea of open source AR could certainly benefit everything we are doing at DAQRI, and potentially empower a whole new generation of scientists and engineers to innovate throughout the space.”

DAQRI’s focus is mostly on industrial uses of AR, so it makes sense of the company to mostly end ARToolworks’ licensing business in order to focus on its core business. The company raised $15 million in 2013 (for a total of $17 million since its inception), but it’s been rather quiet around it ever since, though it did make another acquisition earlier this year when it bought the EEG headband company Melon.

Until we get actual AR helmets on the market, though, AR will mostly remain a nice gimmick that makes marketers happy, but mostly leaves consumers cold. DAQRI’s focus on industry applications clearly shows that it is aware of this, though it now runs the risk of being sidelined by Microsoft’s HoloLens initiative. DAQRI tells me its Smart Helmet is currently being tested by a small group of partners in about ten Fortune 100 companies and will roll out wide in June.