Facebook is combining its lucrative app install ads with deep linking so a specific in-app purchase page opens once the app downloads. The result is a powerful new tool for direct marketers that sell products and services through apps.

Direct marketing is popular on the web where users can see an ad for a specific product and quickly open it in a new browser tab to make a purchase. But on mobile if a merchant sells through an app, it first must convince people to download their app, then hope customers follow through by digging into the app for the purchase highlighted by the ad.

Facebook is now letting deep linking handle that last chore instead, which could increase conversion rates to the point that app install ads and direct marketing can be one and the same. I call these “in-app purchase install ads”, and they could help Facebook blow past the $3.32 billion in ad revenue it earned last quarter. 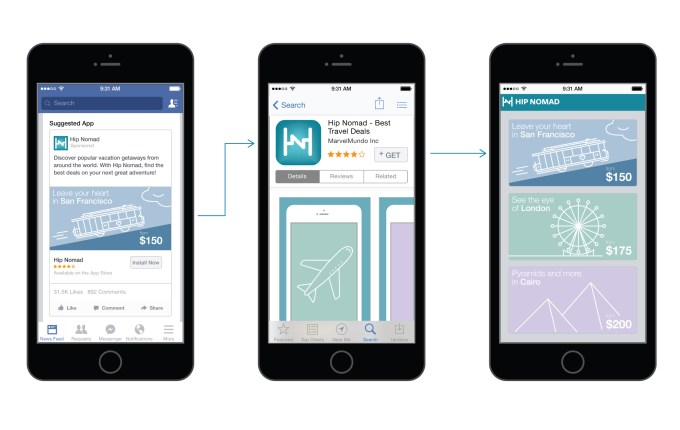 Imagine a Facebook mobile News Feed ad for HotelTonight. The business doesn’t just want downloads. It wants people to buy hotel rooms that earn it a commission. So it targets an ad to people currently in Los Angeles who normally live in San Francisco– people likely to be on an impromptu trip to LA.

Previously, HotelTonight could entice app installs by making its ad say “Get a hotel room tonight in New York City”. But if a user clicked through and downloaded the ad in hopes of booking one of those rooms, they’d have to search for New York City once the app installs. That’s a lot of effort, especially when it can take a minute or so to download apps. Users might get distracted, forget why they downloaded the app, or just be too lazy. In this case, HotelTonight may have paid to get an app install, but didn’t earn money from a sale. 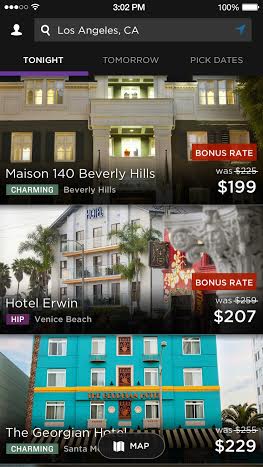 Now, HotelTonight could configure its in-app purchase install ad to immediately open the search results for tonight’s available rooms in NYC, or the purchase page for a particular room it thinks you’re likely to want. You don’t have to remember much or do extra work. You start much closer to purchase conversion, and HotelTonight is much more likely to earn a return on investment.

Facebook already sells app re-engagment ads that drive people to specific pages inside apps they’ve already downloaded. These are often used to catalyze purchases in an app someone might not remember they even have on their device.

But by merging this deep linking with the instant gratification and high conversion rates of app install ads, and the urgent calls to action of direct marketing, Facebook has spawned a different ad type all together.

Where this gets really interesting is if Facebook can layer on ways to deep link to different app pages depending on specific demographics or contextual signals of people who clicked on an in-app purchase install ad. That’s what ad tech startups like URX are working towards. Imagine a sporting goods ecommerce app linking to different types of clothing or equipment depending on your gender, age, and interests, but also your accelerometer velocity, whether you’re on a Wi-Fi or cellular connection, or what other apps are on your phone.

Facebook could one day map its users to the in-app purchases they’re most likely to buy, making the installs it sells produce ROI much more quickly and clearly. Rather than selling developers an oil rig, Facebook could show them exactly where to drill into users’ wallets.