Marc Andreessen once famously said that “software is eating the world.” What he didn’t say was that increasingly sophisticated APIs were driving the rapid creation of software. It used to be coding was a highly tedious and manual task. You had to code each specific service — and that took time.

That meant if you wanted to add a service like taking a credit card, you needed to code it all manually. Today with a few lines of code, you can tap into some remarkable resources whether it’s a payment network like MasterCard, a mapping service like ESRI or the machine learning engine that powers IBM’s Watson.

When you look at the hacks that came out of the past weekend’s TechCrunch Disrupt Hackathon, there is an incredible sophistication to many of them driven by these APIs. People weren’t creating just simple applications, they were stringing together multiple APIs where they were pulling data, communicating to the cloud, sending SMS messages, displaying the data on a map and taking a credit card payment.

All of this is made possible by APIs that with a few lines of code enable programmers to tap into a world of services.

“We are at a time when it’s incredibly easy and cheap to prototype new ideas. Many will not go anywhere, and a handful will be products of the future,” Tarikh Korula, CEO at Seen and co-host of the TechCrunch Disrupt Hackathon told TechCrunch.

On Monday, at TechCrunch Disrupt in New York City, Aaron Levie talked about the power of his company’s APIs to drive his business with 6 billion API calls every month. As he pointed out that may not seem like much when you compare it to web scale APIs, but it’s impressive for the enterprise. Using those APIs, third parties are building tools on top of Box that fill in holes and fuel its other strategy to build vertical markets.

Box has gone so far as to flip the API idea on its head with the release of Box Developer Edition, which lets developers embed Box inside other applications to take advantage of the services Box has developed. In effect, it lets developers use pieces of Box like content management and security, which Box has spent years developing.

Levie sees Box becoming more of a platform play in the future, possibly making more money from the platform than the application itself.

Levie is not alone in this approach by any means. Yesterday, Dennis Crowley from FourSquare told TechCrunch’s Matthew Panzarino that his company has been working on building out its APIs from its earliest days and today its monetization strategy is explicitly tied to opening up FourSquare data to third parties.

“When we started in 2009, I really thought that stuff would work in 2011 and 2012 but the phones weren’t good enough. If we want to do that we have to build all this technology; we can’t just rely on what Google and Apple will give us from APIs and SDKs,” he says. “So in 2011 we got serious about it, building shapes and detection algorithms. It’s taken a really long time to build this stuff and so it’s only now that we’re able to offer [for example] push recommendation services,” Crowley told Panzarino. 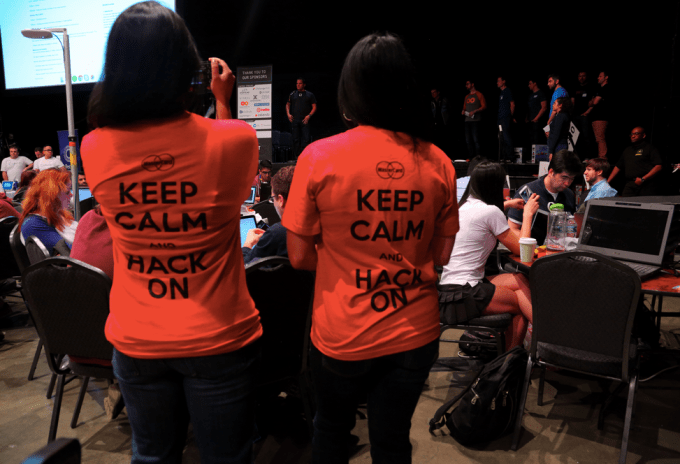 All of the companies that came to the TechCrunch Disrupt Hackathon had one thing in common. They were trying to attract developers to use their products and platforms to build applications. These companies know that hackathons are a great way to introduce developers to their services and evangelize to them.

Korula says everyone wants to be cool and attract developers to their platforms, but it takes work and commitment to community. “You have to listen developers and be an authentic member of the community to figure out the value they need. You can’t just open an API and expect they want it,” he said.

You have to listen developers and be an authentic member of the community to figure out the value they need. You can’t just open an API and expect they want it. Tarikh Korula

As an example, IBM, which is obviously a huge company, is working hard to get developers to use the BlueMix platform — and part of that is showing up at hackathons. Last month it teamed up with NASA on a worldwide hackathon, and it participated in the TechCrunch Disrupt Hackathon giving participants access to the Watson API.

ESRI, an enterprise mapping company has been generating new business by working with startups that use the ESRI platform to build their apps. All of the startups are enterprise or B2B focused and ESRI has gone so far to open up an app store to help distribute the applications to its own customers, effectively acting as a marketing engine for these startups.

As easy it sounds, it’s not always dead simple to make these APIs work and sometimes developers have to bend the tool to their will, Gillian Morris from HitList explained. She and her team built elsewhere.hitlist.com, a machine learning tool designed to help travelers figure out a vacation destination.

“We used Amazon’s machine learning tool and it was harder than we expected. We had to do some work-arounds to make it work,” she said.

She wanted to build a machine learning tool, where she accessed data from her parent website Hitlist, then using a series of questions determine where people want to visit. “We have a tremendous amount of data about where people are interested in going. We wanted to create location genome, like the music genome or Netflix algorithm,” Morris said

There are even tools out there that create API-like functionality when there is no API available, Korula said. He pointed out a startup called Kimono that lets you scrape any web data and create an API on the fly.

In fact, Korula’s own company has generated a hack for Meerkat called Katch. It lets you use the hashtag Katch on Twitter, then automatically saves your Meerkat video to YouTube, and tweets a link to you and your followers. As he points out, Meerkat doesn’t have an API yet, but his team simply piggybacked on the Twitter hashtag.

Regardless of how you do it, APIs can drive the rapid creation of software. It might not always to be successful, but there is power in being able to rapidly iterate and discard things that don’t work — and as these APIs grow more sophisticated it raises the bar at hackathons and the state of the art in programming.