Biofabrication, the process of artificially building living tissue structures, is not a new field — there is more than a decade of research in this area already. But Cabrera and his co-founders believe they have spotted an opportunity to overhaul expensive (circa $100,000+), large, complex legacy devices — taking inspiration from the small, low-cost desktop 3D printers being used by the maker movement to extrude plastic.

Instead of plastic, BioBots’ 3D printer uses a special ink that can be combined with biomaterials and living cells to build 3D living tissue and miniature human organs. The use-case at this point is for research and pre-clinical screening, such as drug testing (as a replacement for animal testing). It’s not about 3D printing replacement organs from a person’s own cells — albeit developments in this area are heading (incrementally) in that direction. More near term future potential for the tech is to help foster bespoke disease therapies, according to Cabrera. 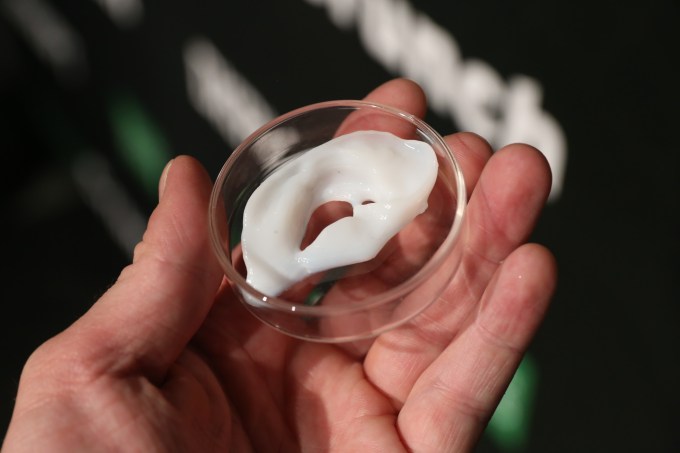 “We really see it as a product for pharmaceutical companies right now, for companies that are doing clinical drug testing,” he tells TechCrunch. “You can use these devices to build 3D living tissue models using human cells, and you can use those models which are way more complex than 2D tissues or animals. They really recapitulate the function of the body. And you can use them to develop compounds for clinical settings. And catch the false positives before they get to clinical trials.”

“Looking down the line for us we see this as a way to develop personalized therapy routines. So you can have patients coming into the clinic and we can take cells directly from the patient and build 3D tissues, miniature tissues, specifically for that patient and test different treatments, different drug routines and personalized therapy’s for patient-specific disease.

“We’ve got this old school notion that we lump diseases together into categories and we give them names but diseases are all different from individual to individual, and our drug development process is sort of outdated — where we develop one drug for millions of people in these expensive clinical trials. Where today we can really use this technology to build one drug for one individual person,” he adds.

The startup began as a dorm-room project as two of the co-founders were at the point of graduating from their computer science and biology degrees at the University of Pennsylvania last June, drawing on their own research interests in genetic engineering and tissue engineering.

“Our idea was we can use the same approaches that were used in the maker movement to build smaller and cheaper devices in biotech,” says Cabrera. “When we looked at what was out there we found devices that existed were huge — they looked like old mainframe computers, they took up entire rooms, they cost half a million dollars and were really difficult to operate. You needed technicians to operate them.”

The team won $5,000 in early capital via a university competition to develop their first prototype. After selling one to a PhD student they decided the idea had legs, and were selected to go through the Dreamit Health accelerator in Philadelphia, pulling in $50,000 via that program last fall. They’ve now been shipping their initial biomaterial printer for a few months, working closely with researchers to keep tuning the initial product (with a price-tag of around $5,000 on the machine for researchers who are helping with BioBots’ own development).

Their recurring business model will be selling different inks used as the base for printing different biomaterials with the printer. Today it’s launching a beta version of a cartilage ink kit (costing $700).

The printer uses visible (blue) light (combined with a compound photoinitiator that’s contained within its ink) to cure biomaterial structures, rather than pressure or UV light as some of the more established devices do. Cabrera says this is more effective for printing living tissue since pressure and UV can both harm living cells, whereas the blue light it’s using does not have a detrimental impact on cells.

To use the device to fabricate a tissue structure, such as a piece of bone, cartilage or liver, a user combines the BioBots’ photoinitiator powder with whatever living cells they want to print, plus binding factors to ensure the cells stick together.

“Our ink is three powders, they would add their fourth powder, which is the binding factor, and they would have to add their cells, mix that up for 5-10 minutes and then put it into the device, have their structure designs on AutoCAD or Solidworks or whatever CAD software they use. Our software would then convert that file to printer instructions,” explains Cabrera.

The BioBots printer has one extruder and uses hydraulic pressure to push the material out of a syringe. Once the biomaterial is in place the printer shines visible blue light to harden the structure. Print time varies, depending on the type of tissue you’re attempting to fabricate, says Cabrera.

“So far our clients are literally working across the spectrum from bone to lung, liver, heart, brain, skin, cartilage using these processes,” he adds.

Messer: What’s your distribution strategy. How do you plan to distribute to hospitals and doctors, and does insurance cover this?

Livingston: You have a list of a lot of partners — have they given you any feedback on this? Have they used it? What have they created?

Cabrera: All of those clients I showed are really early adopters. They’re people who bought the device before we had a kit. Everything they do they’ll telling us about, they’re telling us exactly how they’re using the device, really allowing us to become a library for tissue engineering knowledge. That’s how we were able to figure out ‘hey we really need a cartilage kit’. And this is exactly the components we need to do this. The R&D on this would normally have taken hundreds of thousands of dollars at least, and months if not years, and we able to accelerate that process because of these key partnerships and these researchers working so closely with the device.

Lichtenstein: How do you measure success? What is the metric you use when you’re selling this device? So this is working the way that we need it to work.

Cabrera: The device itself is a mechanical system, that we can measure pretty easily — the resolution, the precision of the device. Really it’s up to researchers to use the device in a way that’s relevant for their work. For example for a pharmaceutical company, they would build a 3D living tissue — a key example that keeps coming up again is for cancers. Build a miniature tumor and test cancer drugs on it, and see which of these drugs work and which ones don’t. Basically if you can recapitulate what’s happening in the body, if you can mimic the function of the body that’s success. If not then we’ll just try it again. That’s the point of this digital fabrication technology — is that you can have really quick turnaround times, change up your designs really quickly.

Fisher: What does this replace currently? In more basic research in life sciences you can grow skin graft samples and test topical drugs on those samples. What do you see this replacing?

Cabrera: First it’s not going to replace anything — it’s going to create new capabilities. So the first thing is you’re literally adding an extra dimension to your tissue culture. Right now all this stuff is done in 2D, and now suddenly you can do it in 3D. Physiologically that’s a lot more relevant. Cells in 3D behave very differently than they do in 2D. So companies are really excited to be working with this technology and it’s something they’ve been looking for for a while. And as far as what we see it replacing in the future, in places like Europe where they’ve banned animal testing in cosmetics that’s a key area we can go into and begin being that replacement for animals. And eventually we see it being a replacement for the entire clinical development of drugs.

Ideally if you’re going to test drugs on one person at a time you’d develop drugs very specifically for that person but nobody wants to be that guinea pig. Suddenly we can take cells directly from the patient, build these 3D tissues, and develop drugs — not on the patient but on their cells and on tissue constructs that are really built from their own body.

Jason Kincaid: There are other companies working on 3D printing as regard to medicine. Can you talk a little bit more about this technique you’ve used that’s not going to kill the cells? How you came across it without a ton of funding? How defensible it is? What other folks might be doing that could do something similar?

Cabrera: I was a student at Penn., and right after I graduated I had a friend — the other founder Ricardo — he was working on the prototypes for this device. And after I graduated we literally bought three Ikea desks, pushed off the furniture on top of a bar where we were living and we stumbled across these sets of chemistry that people had used for a wide variety of different applications. We were looking for something we could use to not kill the cells, basically. And we stumbled into this — basically it’s a compound — it’s a chemical that works with visible light. And thought that sounds awesome. And we tried it and it worked really well. Nobody has actually used visible light — in the IP landscape — for building 3D living tissues. And so that was a space that we thought we can really own. And it makes a lot of sense for biology. So we filed those patents earlier this year. We really think it’s defensible, and not only defensible — we really think it’s the best way to build these tissues.