Three co-founders from local deals startup Perqy — Dave Idell, Adam Chew and Nisha Garigan — met up this weekend at the TechCrunch Disrupt NY Hackathon to present their project, which uses iBeacons installed at local businesses, like coffee shops or co-working spaces, to allow customers to reserve a spot and then be automatically charged for the exact number of minutes they worked at the venue.

Business owners could also view a map of their customers in real-time from an online dashboard.

The idea for the hack, explains Idell, was inspired by a recent visit to a coffee shop that offered something similar, but used a more manual system involving checking in on a tablet installed in the store. There, customers would enter their phone and seat numbers to provide the business with their name and location.

But with Croissant, check-ins would instead happen automatically by way of a consumer-facing mobile app. From this app (which was not complete at the time of the hackathon demo), customers could reserve a seat at the co-working space or even order items from an in-app food and drink menu.

The app works with Bluetooth beacons to register the customer’s check-in and order (if applicable), and would then automatically charge their credit card when they left the store.

For the purpose of this weekend’s hack, the team used APIs from Gimball, who provided iBeacons to test with; each has a line-of-sight up to 50 yards. MasterCard’s Simplify Commerce API was also used to automatically process customers’ cards when they left the designated space. 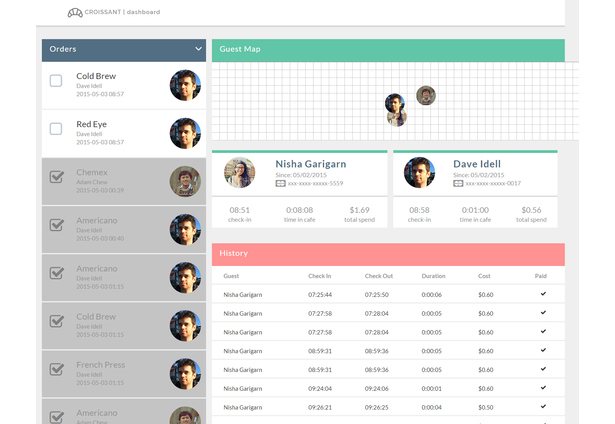 This sort of system would make sense for a coffee shop that wanted to offer its customers the ability to reserve a table to use as a workspace for a designated period of time, allowing them to bring in additional income on top of their food and drink sales. Meanwhile, co-working spaces could charge users by the number of minutes they were actually present, rather than having them book time in half-hour or hour-long chunks, as they often do today.

However, there’s also the potential for any business that wanted to track its customers’ movements throughout the day, or their overall time spent in the store using iBeacon technology. Of course there are already a number of companies working to develop just this sort of thing today on a larger scale.

Croissant’s creators say they’re not sure they’ll work on their hack more after this hackathon wraps, but they’re not discounting the possibility.

“There might be some synergy with Perqy,” notes Idell. “We’ll have to let it sink in a little more.”