Researchers at the University of California, Los Angeles, have created a smartphone ultra-zoom solution that allows scientists in the field to image and size DNA. The tool, which uses a little 3D-printed box that acts as a high-resolution microscope, can be used to see objects as small as two nanometers in width. 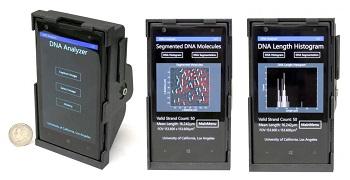 “For perspective, that makes DNA about 50,000 times thinner than a human hair,” said Aydogan Ozcan, the UCLA professor involved in the project. “Currently, imaging single DNA molecules requires bulky, expensive optical microscopy tools, which are mostly confined to advanced laboratory settings. In comparison, the components for my device are significantly less expensive.”

 The device is intended for use in remote laboratory settings to diagnose various types of cancers and nervous system disorders, such as Alzheimer’s, as well as detect drug resistance in infectious diseases. To use the camera it is necessary to first isolate and label the desired DNA with fluorescent tags.Ozcan says such laboratory procedures are possible even in remote locations and resource-limited settings.To scan the DNA, the group developed a computational interface and Windows smart application running on the same smart phone. The scanned information is then sent to a remote server in Ozcan’s laboratory, which measures the length of the DNA molecules. Assuming you have a reliable data connection, the entire data processing takes less than 10 seconds.

Considering current methods require non-portable heavy machinery and computers, this seems like a godsend for researchers in the field. The team is currently using the tool to “detect the presence of malaria-related drug resistance.”