It’s been increasingly evident for years: smartphone users are digging bigger phones as they do more on screens, and spend less time talking on the phone. And there’s no sign of the appetite for super-sizing mobile handsets abating — not according to a new report from Yahoo-owned mobile analytics firm Flurry.

The firm has looked at a top slice of data taken from the 1.6 billion devices it tracks every month — focusing on the top 875 devices it says accounted for 87 percent of sessions in March 2015 — to explore global active device usage by screen size. Flurry found that phablets have more than tripled their share of usage since last year.

In January 2014, Flurry recorded just 6 percent of active users were on phablets versus 68 percent using ‘medium phones’ (devices with a screen size between 3.5 inches and 4.9 inches). But by March this year phablet usage had swelled to a fifth (20 percent), with medium phones squeezed down to 59 percent.

Full-sized tablets are also being cannibalized — or capped — by phablets, with a shrinking overall share of active users: 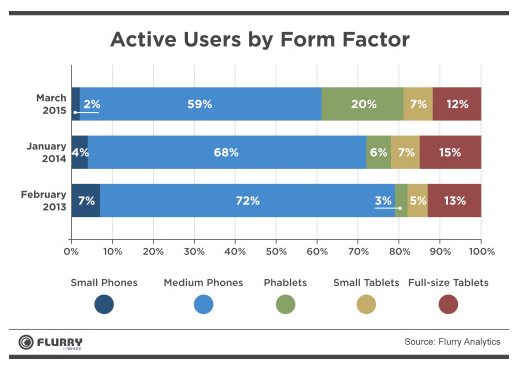 Apple’s first phablet, the iPhone 6 Plus, went on sale last fall — finally affording iOS users who want to remain on Apple’s platform the option of using an i-Phablet. That pent up demand has evidently contributed to driving phablet usage.

That said, Android remains the dominant force in phablets — which is not surprising, given how many more large-screened Android smartphones there are to choose from versus just the one iPhone. Flurry found that around one-third (36 percent) of Android users are using phablets versus just 4 percent of iOS users. So iOS developers are still mostly going to be focused on building smaller phone experiences — and on iPad apps (full-sized tablet usage accounts for a fifth of iOS usage).

By contrast, Android usage on full size tablets is very weak (just 3 percent) — underlining what we knew already: that Android tablets have flopped, but also that there has been less impetus and demand for full-sized Android slates because Android phones have had larger screens for longer. 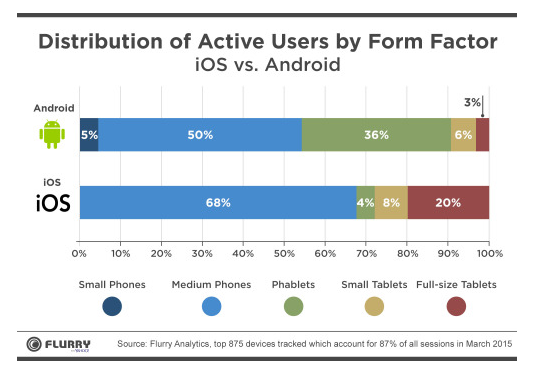