Google announced today that it will begin running tests of a new way to deliver search results to mobile users with slow connections. The company’s pilot trials will initially take place in Indonesia, a country where the Internet is playing a greater role in people’s lives – especially among younger users – but is still plagued by slow mobile connection speeds, which average around 2.0 Mbps. With Google’s page optimization technology, however, the company says it’s able to load pages four times faster.

The tests will begin in two weeks, the search giant says, and will involve displaying optimized web pages to users who Google detects are visiting from devices on slower mobile connections, like 2G, for example. These optimized pages will be loaded up by default, but users will have the option to click a link to visit the original page if they choose, and publishers also have a way to opt out of the optimizations.

Only mobile users surfing the web from their mobile phones will see these new pages, not those using Google search from tablets or computers.

The system works by transcoding web pages on the fly – which basically means that Google is converting the page to a more lightweight format that loads faster and saves data. The company says that these transcoded pages use 80 percent fewer bytes than normal pages, and because they load more quickly, Google has seen a 50 percent increase in traffic to supported sites.

For the time being, pages are only transcoded for searches performed from the Chrome browser and the Android browser (on Android 2.3 and higher). 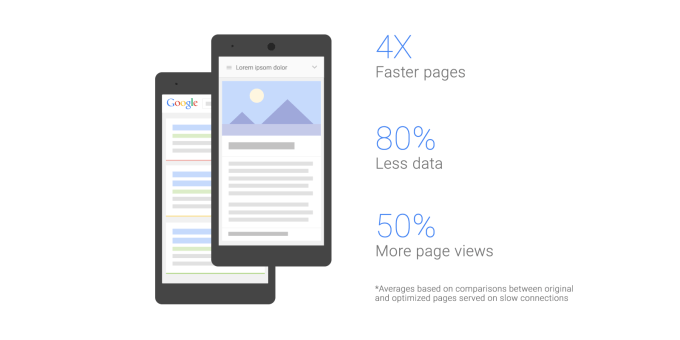 This not Google’s first effort at developing optimization technology aimed at mobile users. The company earlier last year rolled out an optional data-compression feature in Chrome for mobile, which was also designed to reduce data usage. But that effort was focused more on helping smartphone owners save money on their monthly cell bills, while these tests in Indonesia are more about making Google search – and the web in general – more usable.

In all cases, the focus on making the mobile web more functional is critical to Google’s bottom line, as the company continues its transition into a world where much of the “web” is served up by way of native mobile apps. That shift could potentially mean fewer Google searches, and ultimately impact Google’s ad business.

These optimizations in the near-term will affect advertisers and potentially ad revenue, as the technology means pages are limited to showing just three advertisements for now. Google is currently working with ad networks Zedo and Sovrn to support their ads along with AdSense, to start, and it’s working to support DoubleClick for Publishers, too. It intends to include other ad networks in time, and is offering interested parties a way to apply to be included in the transcoded pages.

For publishers, the change could mean fewer supported ads on their pages, but on the flip side, their pages are likely to see increased traffic because of the optimizations, which means more visitors, page views and ad clicks.

Some pages will not be transcoded, Google also notes, including those that require cookies (personalized sites or those where you have to login in order to use them), data-heavy sites like video sites and others. These will be labeled as “non-transcoded” in the search results.

Presuming the Google trials in Indonesia go well, it’s possible that Google will roll the technology out to other developing markets, but the company has yet to confirm those plans.