Dopay, a London-headquartered startup that offers a payroll service for the unbanked, has closed a $2 million seed. Investors in the round of funding include global private-equity firm ACE & Company, plus a syndicate of angels from the banking, private-equity and hedge-fund industries.

Dopay went through Barclays London-based fintech accelerator last year as part of its inaugural cohort of startups. Barclays partnered with Techstars for that program, and the latter’s VC arm, Techstars Ventures, is also investing in Dopay’s seed round now.

Dopay’s product is a cloud-based payroll service that employers can use to calculate and remit salaries electronically to staff who don’t have bank accounts of their own (and also to those who do have bank accounts). Unbanked employees receive their salaries in a dopay account, which comes with a debit card.

They can also manage access to their dopay account via an app which lets them view a real-time balance, as well as send money to others, and top-up prepaid mobile. If users can’t access the Internet there is also a call centre option for accessing their accounts. Part of the funding will go towards developing more features for the app, dopay said today. 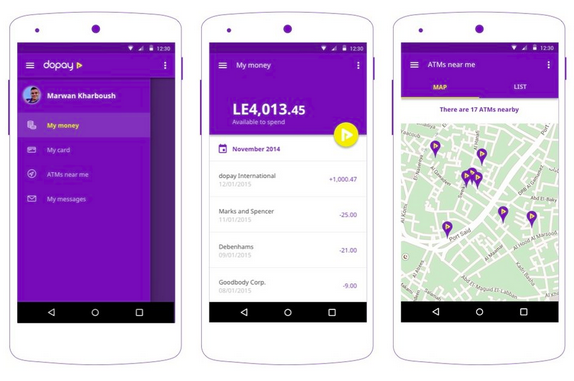 The first market for the service is Egypt, where dopay soft launched this week with a couple of companies. Founder Frans van Eersel tells TechCrunch the team will also be using the new funding for a full launch there in June, and to expand into additional markets — in the Middle East, Africa and India. The size of the market it’s attacking is the roughly 2 billion people globally who have jobs but no bank account.

Dopay accounts, which are being powered by Barclays* and Visa, do not accrue any interest for the account holder. If the employee leaves their workplace they can retain their dopay account and have a new employer deposit wages into it. Deposits are also possible via direct debit from another bank account.

*Dopay does not have a banking license itself, so remitted money is held at an escrow account at Barclays Egypt in its initial market.