Microsoft announced today at its Build developer conference that during its fiscal 2018 — after the middle of 2017 for the rest of us — its commercial cloud revenue will hit a $20 billion run rate. That means that the products Microsoft lumps together as “commercial cloud” — Azure, Office 365 for corporations, etc. — will generate around $5 billion in revenue, at least, during one quarter of the firm’s fiscal 2018.

Is that a lot of money? Yep. Commercial cloud at the company is currently on a $6.3 billion run rate. That figure was up $800 million, sequentially, from the preceding quarter. The end of Microsoft’s fiscal 2017 is around nine quarters from now. That number implies that Microsoft expects its commercial cloud business to grow to north of $1 billion per quarter for the next few years, a dramatic acceleration from its current pace. 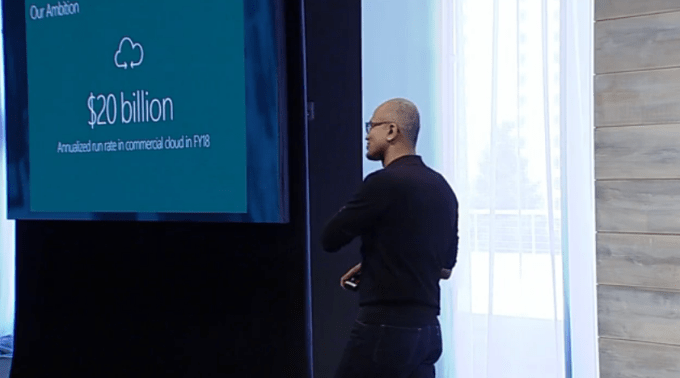 Microsoft therefore expects commercial cloud incomes to become a pillar of its revenue quite quickly. Microsoft’s first-quarter revenue totaled $21.7 billion in its most recent quarter.

So, Microsoft’s move to the cloud is actually happening, and the company just told investors how fast it will grow. The formerly diminutive, Redmond-based software company just gave itself a reasonable challenge. If it can’t hit that run rate, either the cloud was overhyped or Microsoft’s strategy wasn’t firing on all cylinders.