Jive Software announced the general release of Jive Chime today, a real-time messaging app that could well be a buzz across Slack’s bow — and an attempt to modernize an aging platform

When Jive announced its business app strategy earlier this year, CTO Matt Tucker said it was about giving customers new ways to interact with Jive services.

“We wanted to give more companies a way to interact and use Jive services that are built around daily habits, Tucker said.

To that end, Jive has begun developing apps to provide new ways for employees to communicate in a less formal way using mobile devices. In January, it announced the first two apps: Jive Chime, the social messaging app and Jive People, a network directory to stay in contact with people in the organization.

“Jive’s new product direction — what they are calling work style apps — represents an intentional shift from the broad-and-shallow design thinking of ‘social collaboration’ tools to the deep-and-narrow design approach arising from the mobile era of computing,” Stowe Boyd, senior analyst at Digital Clarity Group (who has been writing about enterprise social for many years) told TechCrunch.

“Deep-and-narrow apps are focused on smaller social scale, where work actually gets done, instead of talked about,” he added.

The darling of the moment in real-time messaging is Slack, which launched at the beginning of 2013 and has already raised $340 million across seven rounds. Not bad in just over two years. But there are other competitors out there too like HipChat, which was acquired by Atlassian in March, 2012.

“Yes, Jive Chime is a new work chat product that will compete with Slack, Hipchat, Hall, and the others. Obviously, Slack has huge share of mind,” Boyd said. 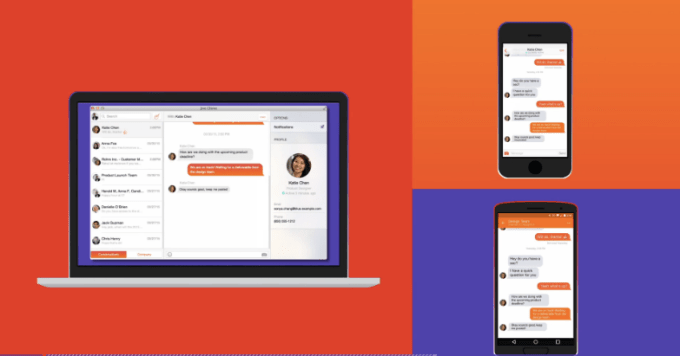 “The Jive platform has had communication capabilities for many years, in the form of microblogging and activity streams, and these have been accessible on mobile devices through the Jive mobile app that runs on Android and iOS,” explained Larry Hawes, principal at Dow Brook Advisory Services.

He said the idea behind Chime is to focus on one communication task, rather than the whole kit and kaboodle as the previous Jive mobile app has done.

Jive competes with companies like Yammer (which Microsoft bought in 2012 for $1.2B), Socialcast (bought by VMware in May, 2011), Salesforce Chatter, Asana and other tools designed to facilitate new ways of communicating inside the enterprise. The idea is to move beyond email and find more efficient ways for employees to talk to one another in a digital setting.

Facebook also announced a plan in January to launch an enterprise version.

The market was originally called Enterprise 2.0, a term coined by Harvard professor (now at MIT) Andrew McAfee to describe things like blogs, wikis and collaboration tools that were evolving from consumer tools referred to in the early 2000s as Web 2.0. As these tools moved into the enterprise, new companies formed and there was a lot of hype around this approach.

The market never developed quite as people expected as it proved harder to implement new ways of working, even though the new approaches made sense. It’s still evolving.

Whether these apps can give Jive a new lease on life remains to be seen. The company’s stock price was $5.50 a share at press time, well below its 2011 IPO price of $12. There were rumors last year that SAP was interested in buying the company, but that acquisition never materialized.

Perhaps the app strategy will help change its fortunes and let it chime in with some new markets.