I’ve got a pretty bad addiction to restaurant delivery service Seamless, but even I’ll admit it’s not perfect — sometimes there’s a long wait for food that shows up cold, and sometimes I get stuck in a rut, wanting to try something different but unwilling to gamble on a new restaurant or weird-sounding dish.

And yes, when I indulge that addiction often enough, things can get pretty pricey.

Maple is launching today with the promise of a better experience. It’s backed by Momofuku chef David Chang, so it has plenty of foodie cred.

To be clear, Maple isn’t just delivering food from existing restaurants. Instead, like Sprig and Spoonrocket, it both prepares and delivers the food itself. As outlined by co-founders Caleb Merkl and Akshay Navle, as well as their executive chef Soa Davies, the company is trying to rethink the delivery experience, so that it’s not just an add-on to an existing business.

“At a high level, we’re trying to purpose-build a company that has a singular vision to make delivery exceptional at every touchpoint,” Merkl said. “To do that we really had to own the entire process — everything from sourcing ingredients to last-mile delivery.” 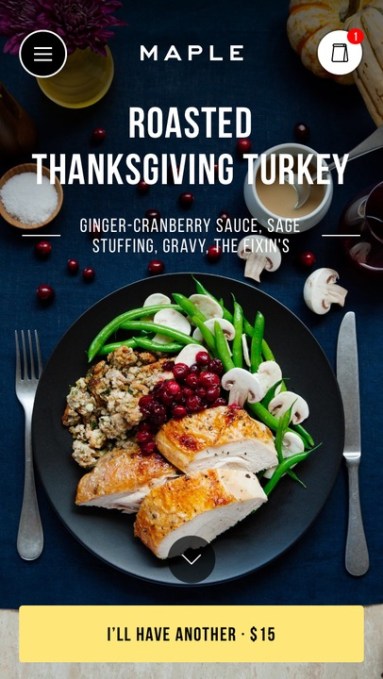 So when you open Maple’s iOS or Android app, you’ll be presented with just three menu options (including vegetarian), whether it’s for lunch or dinner. Once you’ve swiped through the choices and chosen what you want, the food should be delivered to you in 30 minutes or fewer.

That might not sound like a dramatically different experience from existing services, but Maple says the end result should be food that’s always hot and fresh when you get it. (The food is initially prepared in a central location, but the final steps are saved for satellite kitchens throughout the city.) The limited menu means you don’t have to agonize over your choices, but since it rotates, you can try new things with the knowledge that it all comes from Maple’s chefs.

And by eliminating the costs of running a physical restaurant, the company can also keep things relatively affordable. Lunch costs $12, dinner costs $15 — with tips, taxes and delivery fees included.

I tried some sample dishes while visiting the Maple offices, and I found them quite tasty. (Sadly, our meeting took place between meals, so I had to restrain myself from devouring everything.) While I nibbled, Davies talked about testing out different recipes and seeing how they traveled — for example realizing she needed “heartier greens” for the salads to ensure they wouldn’t deflate while being biked around New York City’s cobblestone streets.

Davies (a chef who’s done stints at Splendido and Le Bernadin) added that she was introduced to Maple through Chang, and she said she shares Chang’s belief that “food is going to get out of restaurants more and more, and on-demand is the answer.”

While Maple is officially launching today, it’s only available in a relatively small area for now — New York’s financial district, south of Chambers Street. I guess a slow rollout is the price of the “own the entire process” philosophy, but Merkl and Navle said that once they’ve worked out the kinks in the launch area, they plan to expand throughout New York and, eventually, beyond.