Headout, a mobile travel application that functions as sort of a mobile concierge, helping you find tours, activities and tickets to local events in select U.S. cities, has closed on $1.8 million in seed funding in order to expand its business to new markets. Currently only live in New York and Los Angeles, the startup says it plans to utilize the funds to reach 12 more cities by year-end.

This includes expansions into San Francisco, Los Angeles, Chicago, Washington D.C., Miami, and others over the next few months.

San Francisco and L.A. will be live next month, the company notes.

Describing itself as an “Uber for tours,” the startup first began as Bangalore-based Tourlandish, and was initially targeting travel to and from Asia. But the company, which later participated in the 500 Startups accelerator program, shut down that app and relaunched with one focused on New York tours and events instead.

After being live in New York for around six months, Headout launched in Las Vegas as its second supported city.

Today, Headout has close to 500 last-minute activities available in its application, which the startup reports is anywhere from five to ten times more than its competitors offer. There are also 300 more vendors on waitlists for inclusion.

Not all vendors are able to participate in Headout, however. Instead, the company tests out the activities in advance in order to vet them. If approved, the vendors are then given access to their own standalone mobile application that allows them to control when their activities are made available to Headout users. That is, they can use the service to quickly fill unsold inventory by listing the number of seats or tickets available and reducing the prices, if they choose.

The idea with the consumer-facing app is to quickly connect travelers with a variety of travel experiences, ranging from theater tickets to helicopter tours to dinner cruises and more with just a few taps. The app breaks these down into various categories within the app for easy access, and even makes its own recommendations in an “Editor’s Choice” section.

In addition, the startup is developing algorithms that will personalize its recommendations even further, taking the larger inventory available and narrowing it down to just those activities that best match up with travelers’ interests. Today, those algorithms only look at basic data like where the app is opened, time of day, and weather, for example, but in an upcoming release it will tap into social data from Facebook and Twitter, as well. This will allow it to understand an individual’s interests, by pulling insights gained from their likes and status updates.

Co-founder and CEO Varun Khona says the idea for the company was sparked by a European road trip he and co-founder Suren Sultania once took. They realized that the existing online marketplaces were lacking in availability and in interesting “long-tail” activities, while their pricing was the same as buying directly as a walk-in. You also had to print out physical vouchers, which seemed fairly dated. 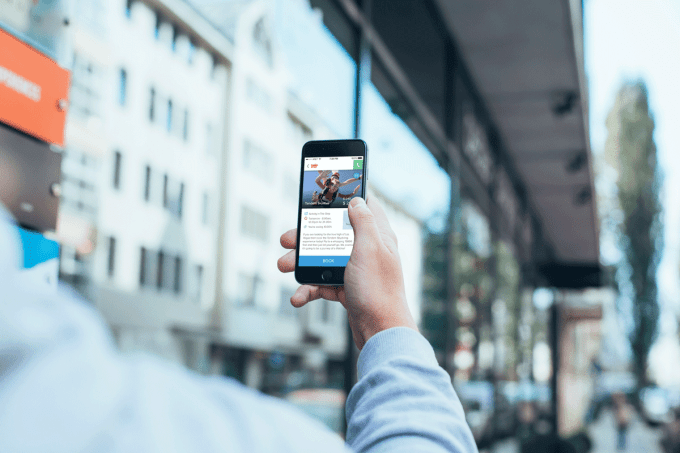 “Overall, they had built their mobile apps as an afterthought, and the business wasn’t built around the spontaneous or on-demand use case,” says Khona. “We knew there are a lot of folks like us who do not pre-book their holiday activities and an app meant to do just that in the easiest way possible sounded like an exciting idea to work on,” he adds. They realized as they went to work on what became Headout that the space was lacking a decent aggregator, which is why the company’s long-term goal is to become that brand for any destination in the world.

Since its launch last July, Headout claims to have booked activities for “tens of thousands” of customers who hail from over 65 countries worldwide. Khona says the business has been doubling every month, and is expected to grow ten times this year, thanks to its forthcoming expansions. The company takes 20% of its ticket sales to generate revenue, he notes. Headout is backed by Version One Ventures, an early-stage fund focused on investments in consumer internet, software-as-a-service and mobile businesses. Founding partner at Version One Ventures and board partner at Andreessen Horowitz, Boris Wertz, said his firm’s interest in Headout was due to the opportunities they see in mobile-first marketplaces.

In addition to helping fuel the expansions, the San Francisco-headquartered company is hiring across the board in engineering, sales, operations, and more. The company is also working with others in the travel space which will be using its API in their products and services, but is not yet ready to name partners at this time.