Apigee, a company that helps organizations build and manage API connectors, went public this morning at $17 per share, briefly jumping to $20 per share before closing at $16.68, down 1.88 percent in its first day of regular trading. After-hours, the company is flat.

The company sold 5,115,000 shares in its IPO, raising $87M according to its CEO Chet Kapoor. It trades under the symbol ‘APIC.’ Apigee is worth around a half billion dollars.

As a firm, Apigee has seen growing revenues and shrinking losses. In the half year period concluding in January of 2015, the company generated a net loss of $26.8 million on revenue of $32.61 million. In the year-preceding half-year period, Apigee lost $32.2 million on revenue of $23.4 million. The company’s margins have improved, to put it mildly.

Apigee offered its IPO underwriters the option of buying 767,250 additional shares within 30 days at its IPO price of $17.00/share. However, given that the company is currently underwater from that price, it isn’t clear if the banks will pull the trigger on the exercise option — buying dollars for more than a dollar apiece isn’t great unit economics.

Going public represents the end of a long journey for Apigee, which launched in 2004 and raised an impressive $173 million before going public.

CEO Kapoor believes taking the company public gives his organization greater credibility with customers and partners. From a practical standpoint, it provides a pile of cash that could be used to for acquisitions. He also intends to expand sales and marketing and pour more investment into research and development. 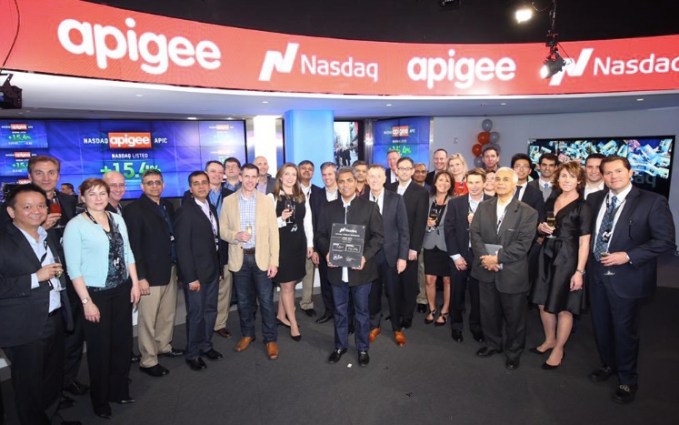 The company typically works with in-house developers or global partners such as SAP, InfoSys or Accenture on implementation. “Customers want to deliver connected experiences to employees, partners and customers,” Kapoor said. He noted Walgreens as an example.

As Walgreens saw increasing use of smartphones, it also noticed that its picture printing business greatly diminishing. Instead of ceding the business, it developed a photo printing API using the Apigee product, building smartphone apps to leverage the new technology. The decision not only saved its picture printing business, Walgreens was able to expose the API to channel partners and grow its revenue, according to Kapoor.

The company has 400 employees and has headquarters in San Jose with additional offices in London and Bangalore, India.