The feature lets users request a private flight, and pick a price that they are willing to pay. JetMe informs you how likely it is that you’ll get that route, at your selected cost. The lower your bid, of course, the lower your chance of snagging a jet.

I spoke with JetMe’s CEO Dmitry Romanyukha about the project, who told me that the company sources flights from a network of brokers, private jet owners, and “fleet operators.” JetMe takes in data on where jets are, and when they are available, and then runs it through algorithm to suggest a workable bid to the user. You can aim for a lower price, of course.

Here’s the tool in action, looking for a private flight to San Francisco to Las Vegas: 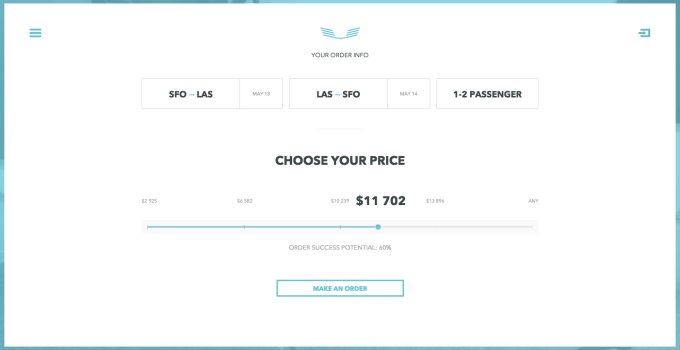 And here’s the same flights at a far lower price point. Note that the “Order Success Potential” percentage tanks: 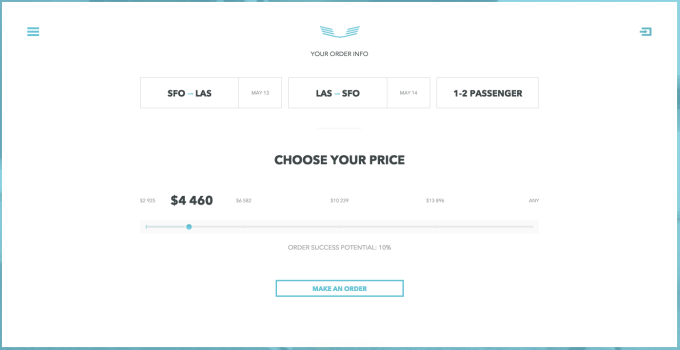 JetMe has raised $400,000 to date, and is looking to raise a $1.5 million round of capital. The company picked up the four hundred in late 2013. The company is a team of nine, mostly located in Ukraine.

The private flight market is not known for its liquidity and transparency. Jets flying empty legs to pick up passengers is a commonly cited issue keeping prices high. According to JetMe, the broker market for private flights hasn’t changed in decades, and brokers keep prices hidden from customers to keep their commission rate up. The startup told TechCrunch in an email that some brokers can command commissions as high as 50 percent.

Wherever there is friction, there is the chance for a technology startup to shake things up.

What will be interesting to see is how many people have been on the cusp of being able to afford private flight. I presume that that demographic will be JetMe’s first audience, given that other categories of people who might fly private presumably already have a solution in place. The startup will want to convert the latter group as well, but what portion of its customers won’t have flown private before will be a statistic to measure.

Looking ahead, JetMe could build an UberPool-like service, on routes where it has historical notes concerning demand. If a number of revelers wanted to leave Las Vegas at a similar time, and there was a way to split the cost of the plane with people you don’t know, it could push prices lower.

For now, JetMe has to prove market demand. Given the sheer amount of money sloshing around Silicon Valley at the moment, the company’s bet feels reasonable.

FEATURED IMAGE: STEVEN BYLES/FLICKR UNDER A CC BY 2.0 LICENSE