As mobile developers rush to release applications compatible with Apple’s new wearable device, the Apple Watch, many are still wondering what sorts of app experiences make sense for the small wrist-borne screen versus that of the smartphone. To some extent, where the Apple Watch really shines is with “invisible” apps – paying for items with Apple Pay, or using the Watch to unlock hotel room or car doors, for example.

Today, two new apps are launching for Apple Watch that continue this trend: Knock and oneID are both debuting Watch apps that can lock and unlock your Mac computer with just a tap. And in the case of oneID, the app works with websites as well.

Knock, as you may recall, first debuted in late 2013 with a clever iOS app that let you knock on your iPhone’s screen while the phone was still in your pocket in order to unlock your Mac desktop or laptop computer. The app takes advantage of low-energy Bluetooth technology to enable the connection between the devices, and is focused on developing a solution to the problem with passwords – namely, that people just hate them and want a better way.

But to be clear, Knock doesn’t replace your password – it simply enters it for you by way of a secure, encrypted connection (1024-bit RSA encryption) when you knock on your iPhone.

At the time of its debut, co-founders William Henderson, who previously worked on the Wallet team at Square, and Jon Schlossberg, who led user experience at Bonobos, said their long-term vision was a future where Knock could unlock anything, not just computers. But instead of bringing the app to the web browser, as they earlier imagined, they turned their attention to Apple Watch, calling Knock and Apple Watch “a match made in heaven.” 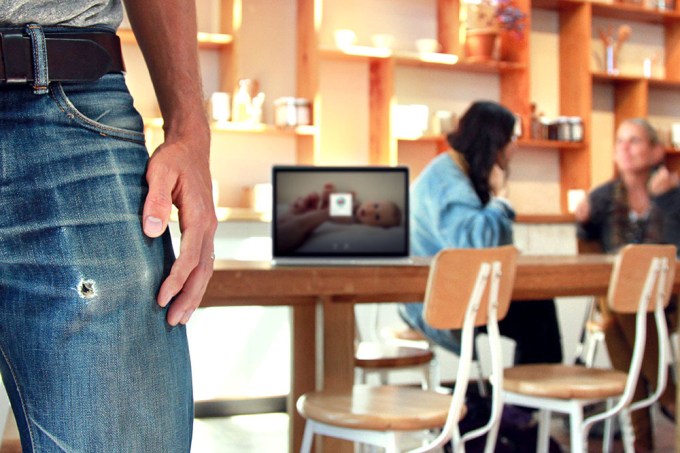 Today, the company is rolling out its next major release of the Knock iOS app with Knock 2.0.

With this release, Knock works with Apple Watch. This includes a Knock Glance, which is a quick way to access the app from the Watch’s main Clock Face. And the app will also automatically pop up when you open your Mac computer.

Also new is “Touch to Unlock,” which adds a two-factor authentication option for those who want more security. With this, the app can use the iPhone’s built-in Touch ID sensor – instead of just knocking on your phone, the app can require a PIN or your fingerprint to unlock your computer instead.

The upgrade is free to existing customers and will be $3.99 for the first two days it’s on the App Store. The price will then increase to $4.99. You can download the app here.

Digital identity management company oneID, which has been developing an identity-as-a-service platform, is also today launching its own take on authentication by way of Apple Watch. In this case, the app not only locks and unlocks your Mac computer, but it can be used to log into websites on your computer, too.

As with Knock, being able to lock and unlock your Mac computer requires a oneID desktop application to first be installed in order to work.

To get started with the Apple Watch set up, you’ll install the oneID application on your iPhone and set up your account there. This mobile app is designed to do more than just locking and unlocking your computer, to be clear – the app also lets you securely store and manage your account information for all your favorite websites and services, and turn on two-factor authentication for those sites where extra security is required.

Once your account is set up and configured on the iPhone app, your rules and settings sync over to the Apple Watch.

While Knock is solely focused on locking and unlocking your computer, oneID’s Apple Watch app is about making all the things its service offers easier to access from your wrist. That includes providing shortcuts for things like two-factor authentication, push notifications, unlocking or locking devices, and more.

In practice, what this means is that, while you’re in proximity to your Mac computer, you can launch the oneID app and then use Apple’s “force touch” to select the device you want to lock or unlock by pressing on the Apple Watch’s screen. (The company is now working on an update that will pop up the unlock request when you come within range of your Mac computer, too.)

This is similar to the way the oneID iPhone app currently works – instead of a “force touch” you use a long press to unlock or lock your Mac from your mobile phone.

But where oneID is most differentiated from Knock is its support for website authentications, which is done by way of a browser extension. At present, this extension is available for Chrome and Firefox, but Safari support is coming soon.

The experience here is more seamless. Like any other password manager, oneID can autofill your username and password information on websites and automatically log you in. However, your Apple Watch can now serve as the two-factor authentication mechanism, where required. This is done by way of a push notification sent to your phone which you tap to either accept or reject.

OneID is a free download on the iTunes App Store. It will remain free, as the company is planning to generate revenue through its developer platform instead.