Apps now let you imitate almost every kind of photography invented, from tintypes to disposable cameras. With all the tools out there, it’d be understandable if developers cried surrender and instead turned their focus to, say, stickers. Smartphone photography stalwart Hipstamatic, however, is trucking on with the release of iOS app DSPO.

DSPO lets you take photos with a group of friends, but doesn’t let you see any of the snaps until after a timer runs out. Until then, you can send your buddies clues about what the pics show, including where it was taken and its “mood” (happy, sad, etc).

The app actually first launched in December 2011 as Hipstamatic D-Series. Despite two million downloads, D-Series ultimately tanked due to a combination of factors that Hipstamatic CEO Lucas Buick outlines in this Medium post.

The company hopes those problems will be solved by new developer tools like Apple’s CloudKit, but Hipstamatic DSPO now faces an even more competitive app market than it did three years ago. The company is betting on its social features to attract new users, who can invite their friends to a camera using Facebook.

“If you’re at a concert and the band tweets out a link to their camera for the show, everyone can contribute and you’ll get the event from all different angles. This works for weddings, festivals, camping trips. It’s the desire to want to be part of the camera that will get people to download,” says Mario Estrada, Hipstamatic’s vice president of special projects. 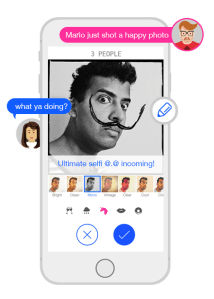 I tried DSPO with Estrada and Buick a couple of weeks ago before its launch. They are right—the fact that you can’t see photos until everyone is done shooting is a great hook, especially if your shooting partners are uploading pics from intriguing venues like a Florence and the Machine concert while you are stuck at home contributing beauty portraits of your cats.

As Estrada points out, however, DSPO’s element is events. I wish I had the app when I went to my friend’s wedding last month, especially since most guests ended up ignoring the hashtag they’d created, which made it hard to round-up photos on Facebook and Instagram.

In addition to its social camera, DSPO has some fun features, including in-app messaging for each camera and filters (drawing tools and more features can be unlocked with a one-time paid upgrade, an improvement over the D-Series monetization strategy of repeat purchases and expiring cameras).

Of course, the challenge still remains of rounding up enough people to make a social album fun, especially if most of your buddies aren’t keen on downloading new apps or big Facebook users, and then convincing them to stick around even after an event is over. But DSPO’s fun concept and features make it worthy new entry to the smartphone photography market.