As part of its first quarter earnings report, Yahoo detailed a reduction in headcount. The company cut 1,000 jobs since the first quarter of 2014, to 11,400. That figure does not include 830 contractors that currently work with the firm.

In a question and answer session with investors, Yahoo called the staffing reductions a “remix.”

Yahoo also noted that it has cut more jobs since the second quarter of 2012. The company previously had 14,200 full-time workers, and 2,800 contractors. Compared to that former tally, Yahoo has reduced its combined contractor and full time workforce by 4,770, or about 28 percent. The company’s reduction in full time staff, 2,800, is slimmer on percentage basis than its cuts to contractors.

Here’s the chart that Yahoo CEO Marissa Mayer shared during her portion of the call: 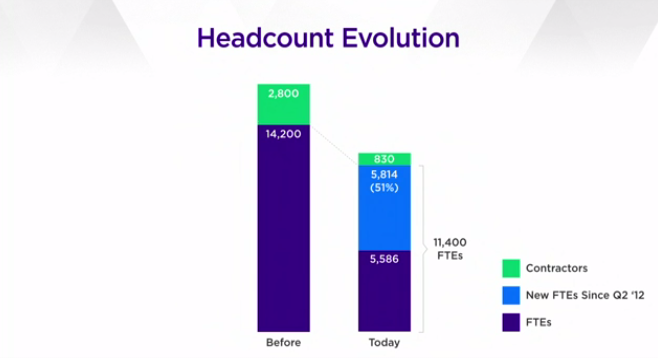 Mayer made a point of noting what she culled since taking the reins: 17 offices and 80 products. Looking from the other end of that funnel, Yahoo noted during its presentation that it has seen a dramatic increase in interest in employment at the firm.

The company also made a point to note that now, compared to the same second quarter 2012 starting point, more than half of its full-time employees are new to the firm. That implies stiff turnover among the veterans.

There have been calls for Yahoo to greatly cut its labor force, and thus boost its profitability in the face of persistently stagnant revenue. That the company has reduced its workforce as much as it has might soften some critics, though calls for even deeper reductions in staffing are not impossible to imagine.