Co-founder of digital marketing agency Razorfish Jeff Dachis has a new app for diabetes called One Drop, which just launched in the App Store today.

Dachis has always been a health-minded individual. He eats well, works out and runs marathons. So, it was a bit of a shock when his doctor told him, at age 47, that he had Type-1 diabetes.

Dachis soon received another shock in dealing with the current healthcare offered to treat the disease. “All I got was a pat on the back and a prescription and sent on my way. I was mad,” Dachis recalled. “I didn’t feel like I was being cared for.”

The tech founder turned to his smartphone for answers. “I was Googling to find some cool gear or an app that would improve the situation,” Dachis said. But he came up short on something that handled the four key components he felt were vital to diabetes management: glucose testing, insulin medication, food and activity logging.

Dachis decided to make his own app instead. That app, One Drop, aims to help those with type 1 and type 2 diabetes to log and share information with each other in order to better manage the disease. 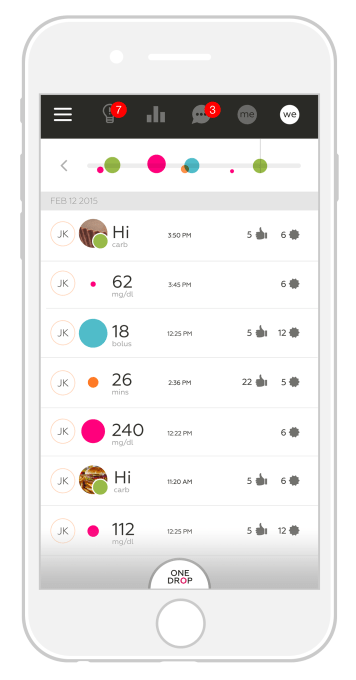 Users of the app can enter their personal insulin levels using a glucose meter, log the effectiveness of their medication, what they recently ate and what types of activities might affect their blood sugar. The food component will let users snap a picture, rather than searching for and adding in the food and nutrition information.

The app starts to keep a running log of how the body reacts to these different data points, which is an important feature in helping both a diabetic person and their doctor determine a more effective treatment plan.

One Drop also provides a support component for users in the “We” section of the app. Users can take a look at other profiles to see what they ate, how they moved, and if their blood sugar seemed to react differently at a certain point in time in order to compare how they are doing to their diabetic peers. Users can also “like” certain points in time on another user’s profile to send encouragement.

There are quite a few diabetes-tracking apps on the market. Diabetes in Check is a diabetes tracker app for iOS with a coaching component. Like One Drop, this app offers the ability to track food, activity, medication and blood glucose levels. It also comes with a journal and diabetic meal planner embedded in the app. Glucose Buddy is a popular diabetes app for both iOS and Android that does much of the same thing, albeit with a less attractive UI. There’s also Glooko, an app used by certain clinics and hospitals to help patients log glucose data using the MeterSync Blue glucose meter device. Most of the apps are either free or cost a few bucks for coaching and other add-ons.

“I’m wildly supportive of anyone looking to tackle the problem of diabetes,” Dachis said of other apps available. “There’s a potential for half a billion people coming online with diabetes in the world. We spend half a trillion on complications related to diabetes,” he added.

One Drop is a free app on iOS, though Dachis plans to release a monthly subscription plan similar to Glooko later in the year. Dachis referred to the plan as something like the “Birchbox for diabetics” and said it would include test strips and a Bluetooth-enabled glucose monitoring device.

You can see the app in action in the video we made at TechCrunch headquarters below: