Pax Labs is best known for its development of the Pax Vaporizer, which changed how a lot of people thought about consuming leafy, botanical materials. Now the company wants to change the way they think about smoking cigarettes with Juul, an e-cig designed to emulate the smoking experience in a nifty little modern package.

Electronic cigarettes have been around for the last several years at least, but haven’t really caught on in that time. While about 60 percent of smokers have at one time or another tried e-cigs, few come back to them. The majority return to traditional cigarettes, in part because e-cigs don’t provide the same sensation as lighting up a Marlboro or other brand.

For the past two years, Pax Labs has been working to change that — first by attempting to reverse engineer the chemistry behind how people’s bodies react when smoking, and then by building a vaporizing device to deploy that technology. The result is an extremely attractive and compact little device that packs the same amount of nicotine as a pack of cigarettes into a tiny liquid-nicotine cartridge.

One of the key findings in the development of its liquid-nicotine “juice” was the use of nicotine salts found in leaf-based tobacco as the core ingredient. By extracting and using those salts, Pax is able to create an experience that is more like smoking than other e-cigarettes on the market. That includes offering up two times the nicotine strength and three times the vapor quality of competing products.

To figure out if that was true, Pax commissioned study to look at the impact of the Juul compared with traditional combustible cigarettes and other e-cigarettes. Here’s a graph of what they found: 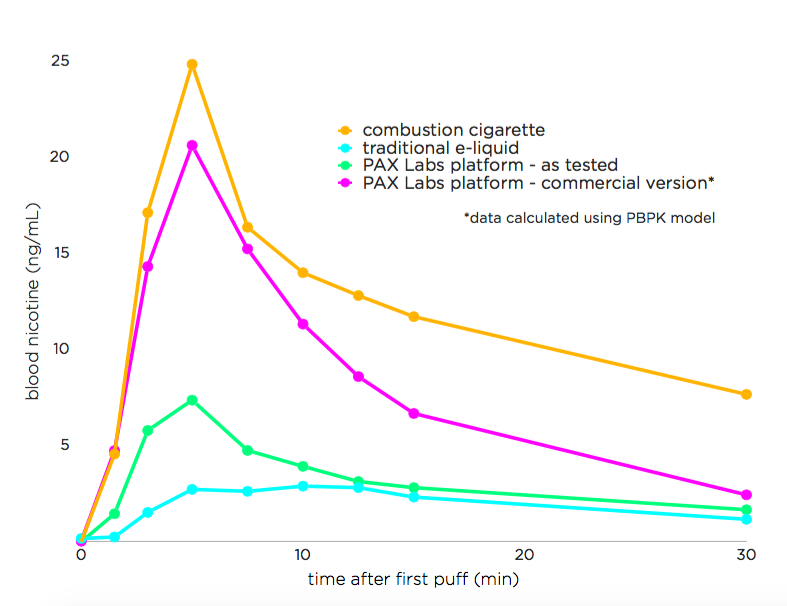 While the chemistry work is impressive, the work done has done on the Pax Juul extends to its industrial design as well. The device is a small, square e-cig that has a battery that handles about 200 puffs a day — or about the same number that a cigarette smoker would get out of a full pack of cigarettes. The system is also designed with its own internal temperature regulation to ensure its liquid doesn’t overheat.

One of the more interesting things about the Juul is that it hasn’t been over-designed from a user experience perspective. That extends to its usage — you simply plug a cartridge in and puff away to make it work — as well as the way users check the battery level. You do that simply tapping on the device, and the Juul comes with a magnetized USB charger that allows users to re-charge the Juul with little hassle.