“It’s crazy that we have these incredibly powerful devices and we’re still communicating the same way we did 25 years ago,” said co-founder Olof Mathé, who added that his experience in Gmail doesn’t really differ that much from the Pine e-mail client he used two decades ago.

Mathé said the web has since evolved, with lots of expressive communication forms through video-conferencing and collaborative editing.

“E-mail remains static, plain, and un-actionable,” the company said in a statement announcing its funding round today.

Mixmax is a simple Chrome plug-in that adds extra functionality to your G-mail accounts. You can put in little apps or widgets to schedule meetings, annotate documents, make purchases, confirm orders or complete surveys — all within the e-mail. (So you don’t have to context switch to another calendar or browser tab to do a task.) 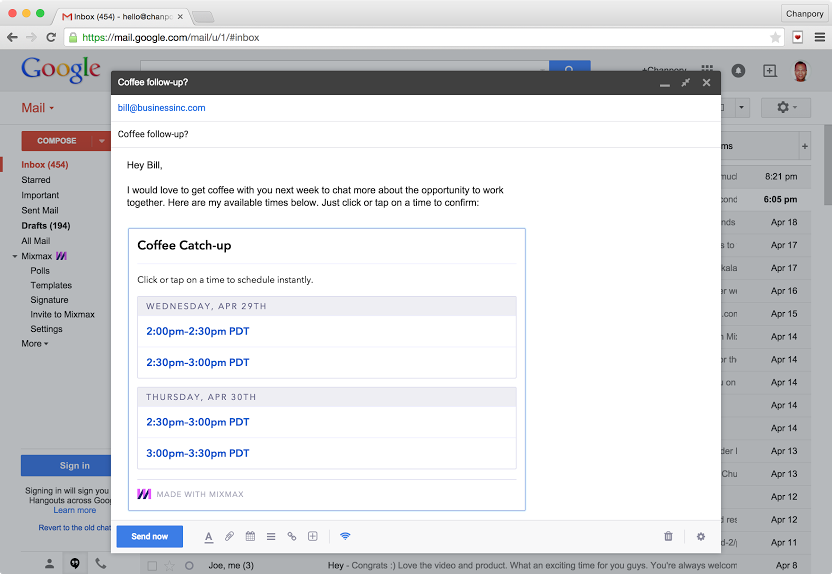 Recipients don’t need to have Mixmax installed to see any of the additional content.  There’s also a Mixmax SDK, which lets developers build other kinds of apps that can work inside of email.

Mathé and his co-founders Chanpory Rith, and Brad Vogel came out of Inkling where they built an e-book authoring platform called Habitat. They’ve also done stints at Skype, Google and Apple on communications products.

They plan to use the $1.5 million in fresh funding to hire additional engineers, expand the platform and build out the SDK.