Climate change is real, and it is getting uglier. Global temperatures are continuing to rise, placing enormous strain on water and food supplies throughout the world. Many areas have been hit hard by the climate disruption, but none more prominently than California, where the state has entered its fourth year of drought with massively diminishing water supplies and hectares of fallow land.

Water supplies may not be top of mind for many techies in the Bay Area – Tartine and Blue Bottle’s recent marriage is unlikely to be thwarted by some tap water problems. The challenge is that agriculture is a huge industry not just for California, but for the United States. The state produced almost a fifth of the country’s total agriculture output, worth almost $50 billion in 2013. With water supplies tightening, there has been growing attention to the high environmental costs of growing almonds and producing meat in increasingly arid conditions.

Freight Farms, a startup based in decidedly not-very-drought-like-these-days Boston, is hoping to completely change the future of food production by massively increasing the water efficiency of farming while democratizing farming to everyone, particularly into urban areas.

The company’s product is a freight-truck-sized farm-in-a-box, with all the necessary equipment and storage required to grow produce. Freight Farms follows the “car model” of releasing a new hardware update once per year, and the company just released its 2015 model. Jon Friedman, president and co-founder of the startup, described it as the “culmination of all the performance we have been trying to put into one complete system.”

The current system, measured against traditional agriculture, can save up to 90% of water usage, and may even be able to go off-grid soon through solar or wind energy. Even better, this efficiency is increasing all the time. In a Silicon Valley-meets-agriculture moment, the farms auto-update their software to the latest versions over the internet.

The Return Of Urban Farming

Farming remains deeply connected to the origins of civilization: the excess supply of food from agriculture allowed hunter-gatherers to stop moving and settle down, creating the first human societies. Ironically though, our beacons of civilization – our cities – are practically devoid of crops, and these days, most urban dwellers may never see where their food actually comes from. That has started to change as community gardens rise in popularity and a slew of food movements like local cuisine encourage a different agricultural model.

Freight Farms sees itself as a key player in this urban food revolution. “We started in urban rooftop development with hydroponics. We realized that even people who had deep pockets, it was really hard to produce food in an urban environment,” Friedman explains. “What we set out to do is to create a tool for individuals who don’t have access to ton of land or rooftops or deep pockets, but have the desire to feed their community or campus, using what we have found to be the most viable space – brownfields, sitting there and not providing value to the city.”

Brownfields are areas that are complicated to develop due to contaminants or pollutants, often creating holes in the fabric of a city. The modular design of the Freight Farm allows it to be placed pretty much anywhere that has access to electricity and water, and its insulation allows it to efficiently handle different climates. The goal is to make approval of one of these farms in front of a city’s zoning committee much easier than a traditional farm, which can often require extensive environmental reviews. 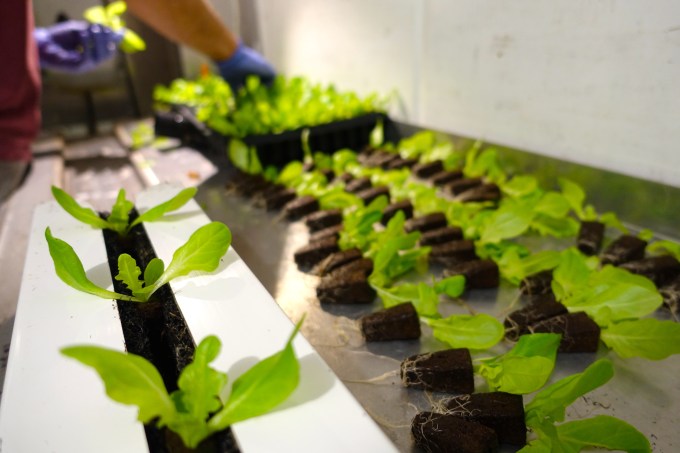 Setting up the inside of a Freight Farm

Todd Dagres, a partner at Spark Capital, led the firm’s $3.7 million investment in the startup late last year. He sees a big opportunity in agriculture technology (AgTech). “Now is the time for information technology to take over and provide the next big boost in productivity,” he said. He particularly liked the urban farming movement, since “the thought that each and every inner-city neighborhood could grow its own food is incredibly powerful, not just because it is a noble cause, but because it is really practical as well.”

Both Dagres and the founders of Freight Farms really emphasized the value of the product for entrepreneurs. Brad McNamara, CEO and co-founder, said the company has tried to make the transition to farming as painless as possible for potential customers. “If you order lettuce, all the lettuce nutrients come in the mail, and we even have presets for the farm itself. If you do want to tune to increase performance, you can do that but it also has autopilot.”

Some people start as hobbyists before going entirely commercial. “Generally, first farmers will try a wide variety of fruits and vegetables, and people get pretty wild in the farm when they start,” McNamara said. “When people go commercial, they tend to want to maximize,” which means only growing one crop at a time inside the farm.

As might be expected, a fully-integrated farm-in-a-box doesn’t come cheap. The current price of a Freight Farm comes in at $76,000, not a princely sum, but certainly out of the range of most people who might want to get involved in farming as a hobby. Dagres of Spark emphasized that there are many financing options available, particularly farm loan programs from the federal government, which offer low interest rates even for first-time farmers.

Longer term, there is potential for these farms to move way beyond community gardens and hipster locally-grown restaurants. “The notion that you could literally ship these on ships to places like Africa and India is really exciting,” Dagres notes, “but is probably not the lowest-hanging fruit.”

As our weather becomes ever more unpredictable and extreme, the need for food supply stability will increasingly become a top priority. Freight Farms looks set to tap into that growing market, all while building community in urban spaces.