With last week’s release of an updated version of the Chrome browser for Android, Google debuted a new feature that will allow websites to engage with mobile users by way of push notifications, making websites more competitive with native apps. Now we know which websites will be among the first to support Chrome push notifications on web and mobile, thanks to additional details Google announced this morning which notes that early adopters for the technology include Beyond the Rack, eBay, Facebook, FanSided, Pinterest, Product Hunt, and VICE News, Roost and Mobify.

These companies’ implementations of push notifications in Chrome will arrive in the “coming weeks,” says Google.

While mobile websites often have a broader reach than their native counterparts, they haven’t yet been able to engage mobile consumers in the same way as mobile apps – which is one of the many reasons why native apps have such appeal. Not only are mobile users reminded of a given company by way of the app icon on their device’s home screen, the company can ping the user with updates and information through push notifications.

But now the latest release of Google Chrome will support the new web standard for push notifications on Android and the desktop, which means websites will be able to push updates to users just like mobile apps do. This technology goes a long way to address one of developers’ top complaints about what the mobile web lacks in order to better compete with mobile apps.

In Chrome, users will be presented with a dialog box on supported websites and mobile sites which asks them if they want to opt in to receiving push notifications via the browser. If they say yes, developers from those online properties will be able to reach the user with updates – real-time communications or breaking news, for example. On Android, these notifications will resemble the look-and-feel of the updates pushed out by native apps, but they’ll be managed within the Chrome browser itself, not in the Android OS settings.

The development of push notification technology for browsers is especially important in the context of mobile, because not every website needs to be a mobile application – and mobile users themselves struggle to keep up with the growing number of native applications that are released in today’s mobile app stores. Studies have shown that consumers have a sort of mental limit when it comes to how many apps they can download and use – and even though app usage is growing, most mobile users download zero apps per month, comScore discovered last year.

Currently, Google Chrome is the browser to support this push notification standard, but Mozilla has begun work on implementing the Push API as well.

The technology, it should also be noted, is in its early days, and there are still a number of limitations to its functionality at present. For instance, in Chrome OS and Android, users will be able to receive push notifications even when the Chrome browser isn’t running, but this is not yet available in Chrome on the desktop.

There’s also no way to add data to a push notification, though this is in the spec. And there’s not a way for developers to remove notifications after a certain period of time, nor is silent background push supported (a way to use push without sending a notification).

Most importantly, for consumers at least, is that there’s no way to prevent users from seeing duplicate notifications in the case of websites that have multiple origin points, or, as is more likely, where the company offers both a native app and website which both do push. That means that consumers could forget that they’ve already opted in one place and end up with double notifications. Solutions to this, however, are being discussed. 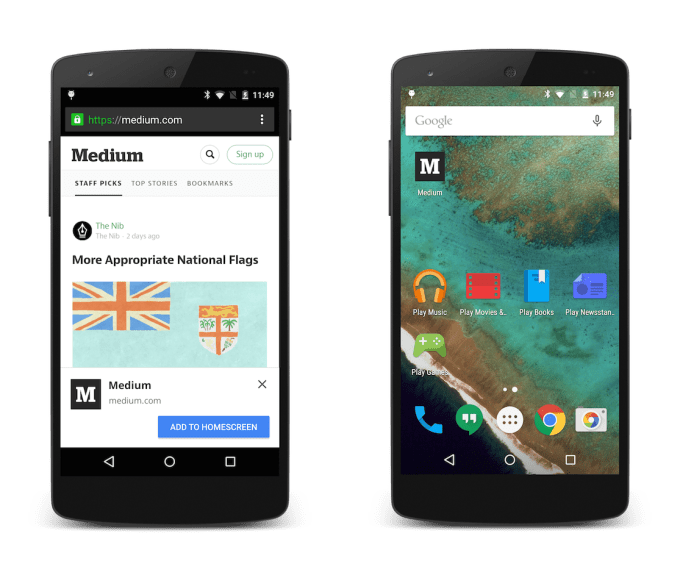 In addition to supporting push notifications, Chrome’s new Android release has also made it easier for users to add websites directly to their device’s home screen with just a tap. That lets users launch favorite sites and services – like Flipboard or Medium, Google suggests – without having to find and download a native app from Google Play.