Berlin-based startup edgee reckons it’s spotted a vacant space in the crowded social media parking lot for a new digital content format designed to sit between the expertise and effort of writing a blog post, and the brevity and flightiness of a tweet.

In a nutshell, the platform (web-only for now but with mobile apps in the works) lets people choose, order and annotate multimedia collages of others’ content, to create themed displays on topics of their choice. For instance, one user has made an edgee entitled Combating the Surveillance State — which links to a Ted Talk by Edward Snowden, books by Alan Moore and Glen Greenwald, articles on anti-surveillance face camouflage and more, on one themed page.

Is there really demand for such a third way online content format? edgee evidently thinks so, arguing that its easy-to-use template tool for building embedded multimedia content collections (linking to the source material) lowers the barrier of entry to content creation by allowing users to remix digital media in highly customized ways, and without having to have high level topic expertise themselves. So basically it’s a content creation tool without the need to create original content.

“What we found out talking to a lot of consumers is that most of them do not create,” says co-founder Markus Maier, discussing the inspiration for edgee. “Many do not feel they have enough knowledge, have mastered the subject matter enough so that they can actually write a blog post.”

“I myself was frustrated. I felt like I wanted to create something online but I never had the time to create a blog. And I always thought Twitter was too reductionist. And then on top of that I’m interested in a lot of subject areas where if you write about it you have to have an incredible wealth of knowledge,” he adds, citing the European debt crisis as an example of an area he’s interested in but does not feel adequately equipped with expertise to blog directly about.

“I can make my own edgee about the European debt crisis without being a PhD. And I felt this idea of standing on the shoulders of other content creators enabling the layman to create something he can be proud of was a really interesting idea.”

On the surface the edgee concept might sound rather like Pinterest. With some overlap with the likes of Genius. Or Medium. Or Google+. Or ello. Or even Flipboard. Not so, says Maier, arguing that edgee offers more control than Pinterest, more content types than Genius, more custom annotation than Flipboard, and flips the rules of Medium on its head — by having the majority of an edgee post not be original content, so requiring less expertise to create. edgees are basically others’ multimedia content — selected, arranged and captioned by the user, so it’s about remixing and repacking.

As for Google+ and ello, Maier says edgee is different because the format is distinct in that users create discrete units — in the same way that a Pinterest user creates different boards — whereas other social networks are about individual posts which are used to populate continuous, unordered social streams.

All of that may sound like subtle distinctions vs other UGC platforms but if edgee can get traction as a focused, content-discovery platform it could offer various interest-based communities a shortcut to content they care about — cutting out the leg work of Googling stuff themselves or filtering friends’ social streams. “Our long term goal is that once people have created enough interesting edgees, consumers actually come to edgee to explore,” adds Maier.

And as for mainstream social networks — the Facebooks and Twitters of the digital world — Maier says edgee is looking to piggyback on those networks, rather than try to compete with them for audience eyeballs. So you can post your edgees to Facebook et al to spread their reach.

“We’re trying to stand on the shoulders of other networks,” he says. “We think an edgee is ideal for somebody who is passionate in a certain subject area to create something that feels… original and then you can spread it via Facebook, via Twitter, via email to their existing audience. So we’re not trying to create a new audience — maybe in the long term — but in the short term we are connected to all the existing social networks.”

edgee is officially launching out of beta today, and has signed up around 50,000 early users during an invite-only two month period. It’s also raised some €500,000 in angel funding so far, and is in the process of raising a Series A round for the next phase of growth.

It’s not hard to see where a (future) business model could take shape for edgee, assuming it can gain adequate traction. The rich media format would clearly lend itself well to dressing up branded content to look like it’s something interesting (aka native advertising). Ecommerce affiliate revenue could be another route to monetization.

Early edgee users have come the tech community, finding it via Product Hunt, but it’s since expanded to be picked up by the Berlin arts scene, according to Maier. He sees expansive use-cases for the platform — including in education, where it could be used to foster collaborative learning. A collaboration feature will be coming in the next few months to allow multiple users to contribute to a single edgee. “It’s one of the most requested features,” he says. “Especially teachers, especially professors. They want their students to chip in, and we’re working on that.”

Elsewhere, the repackaging element of edgees has apparently caught the eye of bloggers wanting to make more out of their existing content. “We even have a couple of travel bloggers that use edgee and just, I guess, repackage their whole travel into one edgee. So this meta level… is actually being used by bloggers,” says Maier. “They mix and match existing blog posts, add some of their favorite other bloggers, they create an expose about their whole travel. So in the travel space we’ve found some interesting traction as well.” 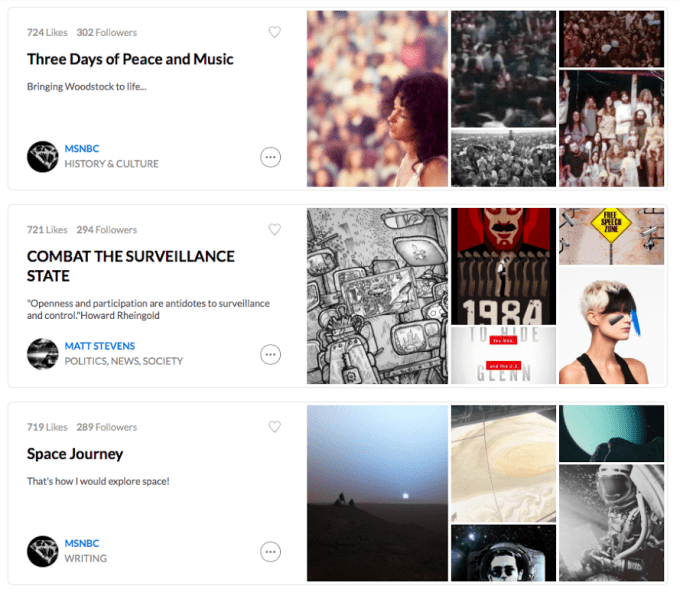