Microsoft promised this morning to release by the end of April a set of Office applications that it calls “Universal” for smartphones running Windows 10.

The company has a two-prong productivity strategy in place for Windows: Office 2016 for desktop use, and, for all other Windows 10 experiences, its touch-focused Office Universal apps. The latter apps, according to Microsoft, will function across tablets and smartphones, dynamically changing their design to allow users to better use them based on their current screen size.

The two names for the two groups of apps — Office Desktop and Office Universal — might seem a bit odd, given that the Universal apps aren’t quite designed to be. The universal tag is instead more useful in the mobile context — these are the apps you will use across Windows devices whenever you’re not at your desk typing away happily on a full-sized keyboard.

Here’s a shot of the Universal Word app, as shared by Microsoft this morning: 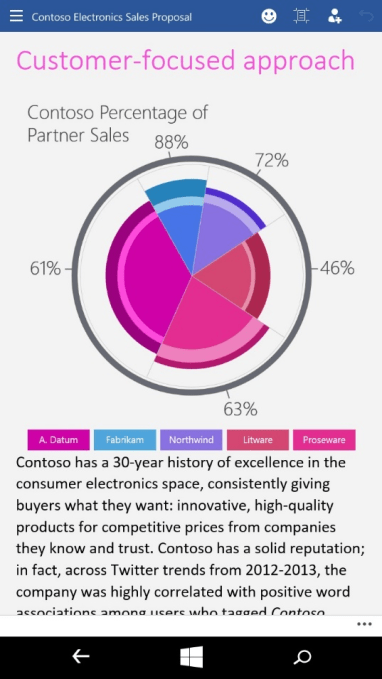 We’ve known for some time that the Universal applications will be free for smartphones and tablets. So, if you do test them out, you can leave your wallet at home.

Microsoft is slowly snapping the parts of its new platforms and productivity strategy into place: Windows everywhere; Office everywhere; Office tools for work environments that have a cost attached; Office tools for the on-the-go user for no cost, all glued together by an application layer — the universal Windows Store; and various subscription services to provide additional content and capability to those who need it — Office 365, Xbox Live, and so forth.

For now, all Windows 10 for phones users can look forward to new code in short order.