We’ve seen lots and lots of 3D printers over the last few years, and they almost all have one thing in common: the objects they print are hard* and mostly rigid.

(* well, except for this printer that prints edible objects out of mulched bananas…)

What if you wanted to print something soft instead? Something you can hug, or snuggle with, or hand to your kid without fear of them jabbing it in their eye?

Disney is on it.

Built by Disney’s research lab along with researchers from Cornell and CMU, this 3D printer isn’t like most printers we’ve come to know. It’s neither extruding melted material (like a Makerbot) or blasting a tub of goo with UV light to precisely solidify it (like a Form1). In fact, it’s as much a laser cutter as it is a 3D printer.

The machine builds the object up layer by layer by cutting shapes out of a sheet of adhesive felt, cramming/heating each layer together as it goes. You know those 3D puzzles where you stack a bunch of sheets to eventually build a weird, blocky version of Abe Lincoln’s head? It’s like that, but created on the fly.

When it’s done, you get what looks like one big block — but once you tear away the extra felt bits (left in place to support the shape as it’s printed), you’re left with your bunny/bird/mostly useless wrench/whatever.

Is it going to change the 3D printing world? Nah. The resolution of the print isn’t stellar and the adhesive layers don’t look durable enough for your kids to toss around. Unlike Makerbot and the rest, you probably won’t see something like this built for home use any time soon.

But that’s not the point — instead, like much of what Disney builds in its incredible research labs, it’s mostly meant for their own uses. Think fast, easy stuffed toy prototypes.

This is hardly the first time Disney’s research lab has tinkered with 3D printing concepts. Check out this printer that can print seemingly impossible spinning tops, for example. 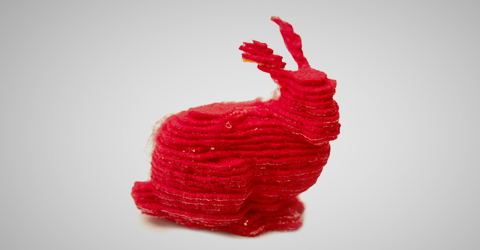