A number of Tinder users are reporting issues logging into the service, seeing new people, editing profiles as well as sending messages. The problems began last night for some, though it’s not clear yet if the outage is affecting all users or just a portion. Users’ complaints, however, followed yesterday’s roll-out of the new version of the Tinder app, which introduced Instagram integration.

But the update itself may not be the root cause for Tinder’s current problems – it’s possible the timing is just a coincidence. (We’ve reached out to Tinder for clarification.)

The app wasn’t immediately broken after the new release, according to our own tests and reports from others. But yesterday evening, Tinder’s Twitter feed posted an update that seemed to be addressing incoming complaints.

Tinder’s post informed those who were having trouble seeing other people on the service to reinstall the Tinder application on their smartphone.

If you are not able to see other people, reinstalling the app will fix the issue. This won’t delete any of your matches or messages.

@Tinder have had to reinstall 5x, each time it works for one session. Do u know root cause??? What to do?

Unfortunately, that workaround didn’t fix the problem for many Tinder users, several of whom tweeted back that they were still having trouble. Or in some cases, the reinstallation only fixed the problem for a single session, they said – but when users returned to the app, it would be broken again. Other users reported that they could not log in at all.

We’ve seen some of the same issues here this morning, where the app never loads new people and eventually times out displaying an error message. However, these bugs seem to be intermittent.

According to DownDetector, which track website and web service outages, Tinder has been experiencing a number of issues since 6:20 AM ET this morning, including server connection problems, issues with messages and authentication. But the reports on social media seem to indicate the problems may have started earlier. 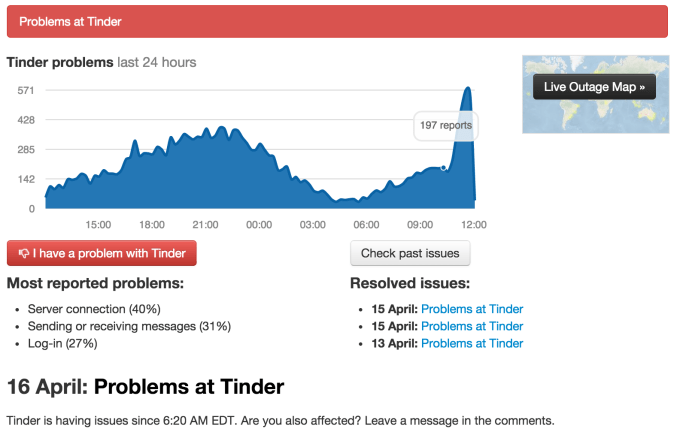 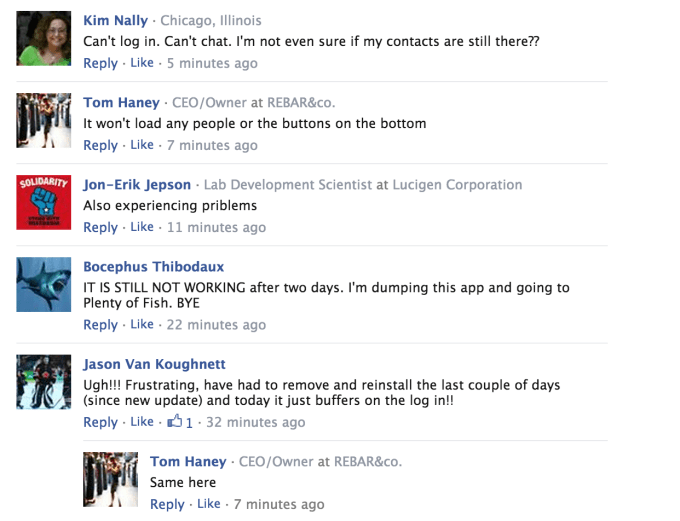 We’ve reached out to Tinder for more information on the cause and reach of this outage, and will update if the company responds.