Not every company or brand needs to be accessible by a downloadable app distributed through a mobile application store, like iTunes or Google Play. Meanwhile, building out massive web destinations also doesn’t make sense in the mobile era, where content is increasingly consumed in “bite-sized” chunks. A company called Wrap Media, which now has $3.5 million in Series A funding from FF Angel LLC and Raine Ventures, is working on developing an alternative with what it’s calling “wraps” –   smaller stories delivered as card-based, swipe-able content that arrives by way of the mobile browser.

It’s easier to understand a “wrap” by viewing one for yourself, which you can do from this link, for example, if you click on it from a mobile device. After launching the wrap, you can swipe through the pages left and right, and swipe up and down to see more content. You can even watch embedded YouTube videos, or tap through links to connect with the brand on social media.

Potential use cases include everything from being able to share stories like the wrap referencing an art installation linked above to being able to embed coupons or merchandise you can buy directly from the automated emails businesses send out, like digital receipts or order confirmations, for example.

But what Wrap Media has built, to be clear, is not another mobile website creation service, but rather what founder Eric Greenberg refers to as a “presentation layer” which can sit on top of any platform. The wraps are initially being delivered by way of the mobile web, but he says the long-term goal is to be able to serve these experiences from anywhere, whether that’s the small screen of a mobile phone, or even the living room TV.

Greenberg previously founded several companies, including systems integrators Scient and Viant, which were backed by Kleiner Perkins, Sequoia Capital, Benchmark, Capital and others. But the idea for Wrap Media initially grew out of a mobile social gifting app he was building which used a card-based user interface. As it turned out, the interface itself had more potential than the app, so he pivoted the company to focus only on that aspect of the business around a year ago. 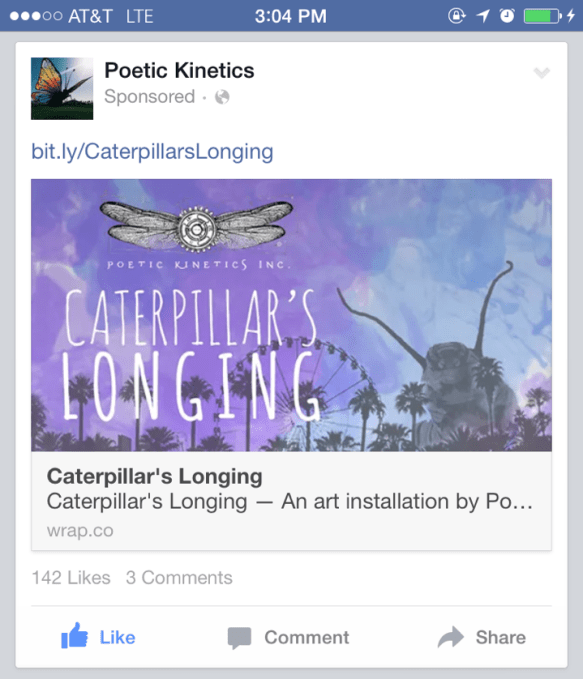 With Wrap’s web-based authoring tool, companies can build app-like messages using tools that are as simple to use as Microsoft PowerPoint. The messages can be shared as a link anywhere – email, SMS, or social media, like Facebook, Twitter, Pinterest and elsewhere. They’re meant to serve as a new format for mobile marketing – allowing companies and brands to tell their stories without having to invest significant resources in development and design, while still looking like they did.

Instead, “wraps” can be built in as little as 15 minutes to a couple of hours, depending on the length and content included.

“This is a story that can’t be told today…because you’d have to develop something from scratch. And to do something like this, is a minimum of six figures,” explains Greenberg. “So instead of spending hundreds of thousands of dollars with developers and designers, you can literally create these interactive experiences with a junior marketing manager, with no code and no design experience,” he says.

The company already has a half-dozen customers it can name, including CBS Interactive, Loverly, StumbleUpon, and a few e-commerce brands and retailers. However, Wrap Media is in various stages of discussions with around 50 other companies.

Pricing for the service, still in private beta, is priced both as a software-as-a-service and on a transactional basis, depending on the customer, though exact price points are still in flux. While cheaper than the hundreds of thousands one would pay for high-level design teams, Wrap is not exactly “cheap.” The service will start at around $300-$500 per month per user on the small business side, but is targeted more so at large enterprise customers.

The company now has $3.5 million in funding, which includes $3 million from Founders Fund’s seed stage fund FF Angel LLC and Raine Ventures, with the remaining $500,000 from Greenberg himself. He also seeded the company with $2.5 million of his own, bringing the total raise to date to $6 million.

Wrap Media expects to release to the public this September.