Collaborative photo albums is the startup idea that just won’t die. Today, photo-sharing and organization app Lyve is rolling out a new feature which will allow anyone to create photo albums with others in their same location, whether that’s at a wedding, a concert, a festival, a party, or anything else. With “Mix,” as this new addition is called, users will be able to capture and upload photos in real-time into albums that are marked as either public or private.

The idea for collaborative photo albums is an itch a number of photo-sharing apps have tried to scratch in the past, but largely (and sometimes spectacularly) failed at while doing so. The problem, in most cases, is that building a shared photo album alone isn’t enough of a draw for someone to download and install a new application on their phone. Plus, there’s the ‘cold start’ problem to deal with – that is, until the app has a critical mass of users, there just aren’t enough people to share your photos with in the first place.

Lyve, however, believes it has an advantage with its implementation, because “Mix” is not a standalone application – it’s just a new feature in a broader photo sharing app that offers a number of other tools and options. 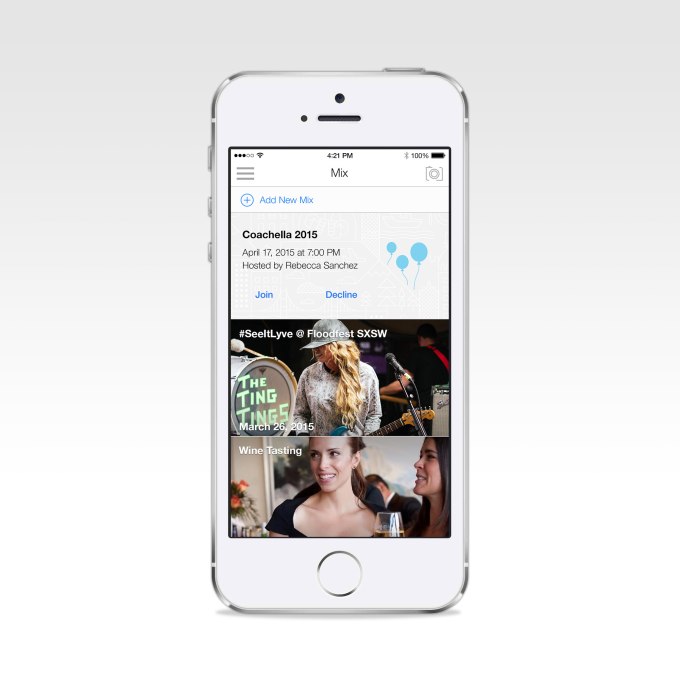 The app began as a complement to Lyve’s earlier product – a home storage box that lets a household securely back up their digital archives, including photos and videos. After storing these items on Lyve’s hardware device, users can access their entire digital collections from anywhere, whether that’s from a mobile app or Mac or PC desktop. Lyve’s software itself is fairly smart – de-duplicating photos when viewing them on mobile and rendering them in a format that’s designed for the screen size of the device you’re using. It also lets you rediscover old photos from the past, edit photos with filters, stickers and frames, tag photos to make albums, and more.

Last October, the company separated the Lyve mobile app from the company’s hardware, making it accessible to more users – even if they didn’t purchase a Lyve hardware device, they could still use the app.

To create a Mix, you can either email or text an invite to your friends and invite them to join. If they already have the app installed on their phone, then the link they receive will take them right into the Mix. If not, then they’re prompted to download Lyve from the app store.

Private “Mixes” are password-protected but public Mixes nearby (within a 1 km radius) will just appear in the app automatically, allowing you to participate in the shared experience.

Lyve will need to attract a number of users for something like Mix to really take off. That’s something the startup doesn’t yet have – it’s still a relatively young company and isn’t disclosing its user numbers or engagement metrics. And like other photo-sharing startups, Lyve faces tough competition from industry giants who all offer their own cloud backup and photo-sharing solutions, including Apple’s iCloud, Google+ Photos, Amazon’s Cloud Drive Photos, Dropbox, Yahoo’s Flickr, as well as social media services like Facebook or Instagram, and others.

If anything, Lyve looks like it would make for a good acquisition target for one of the bigger companies, though of course it claims that’s not the goal. But the app seems to have the most in common with Amazon’s Cloud Drive Photos app, as that app also offers a similar timeline feature. Even some of the user interface elements are the same – like the gray-colored, left-side navigation, for example. And Amazon is decidedly in need of something to differentiate its functional, but rather unglamorous, software app from the others in this space.

That said, Lyve as it stands today may appeal to those who want a solution that’s independent from these larger companies, which are more often the target of hacks, data breaches and government surveillance. And Lyve’s app still works well with its hardware for those who prefer to “host-it-yourself.”

The updated Lyve mobile app is available now for download on Google Play and iTunes.