Most people know Dave Morin’s Path for its eponymous social networking app, which sought to create a more intimate place for mobile users to share with their closest friends. But after four years spent focusing mostly on that app, the company now wants to be known for creating a whole bunch of different products.

That starts today with the launch of Kong, an app for iOS and Android that is a big departure from its previous offerings. The app, being launched today, is designed to create a new type of social interaction built around sharing short, looping GIFs of your face.

At its core, Kong gives users the ability to capture and share short, visual snippets of themselves with people they might know through the app and friends on other social networks. But it’s also a bit more than that. Kong is a group messaging platform and a meme machine, and it represents a new way of thinking about how we build and interact with social feeds.

The main mechanics of the app are pretty easy to understand: When logged in, users simply push a button in the bottom of the screen to record a short, animated selfie. They can also tap their screen to add text (or emojis), swipe to add filters, and choose to share within various channels created by the community.

Once captured, an image will be shared with other members on Kong. But it can also be saved as a GIF or as a video, shared via SMS or email, or uploaded to other social networks, like Facebook, Twitter, or Instagram.

Beyond being just a GIF creation app, Kong also hopes to create a sort of viral community made up of users playing off against one another. While users can — and should! — share their GIFs with friends on other networks, what makes Kong fun is the different channels that users can be invited to or self-select to be a part of.

Community is important to making Kong fun, which is why the app goes to great lengths to ensure that users have something to look at when they sign up. When you first log in, the app will suggest users to follow based on a hashed version of your contact list. That includes friends that are already using the app, as well as some people you might know but aren’t in your contacts.

Images created show up in a user’s home feed, or can be shared in different channels of content. Channels can range from the wacky (#uglycry, #chubbybunny) to the mundane (#music, #coffee), and can also be created to cover specific places or topics of conversation (#sanfrancisco, #applekeynote).

One of the key differentiators for Kong is that users can only have one image active in any given channel. That’s important, as anyone familiar the interface dominant on networks like Twitter or Instagram — or, for that matter, Path! — knows how frustrating it can be to have a single friend spam their feeds.

For Kong users, that’s a welcome decision. After all, no one really wants to see a feed full of a single person’s selfies.

The First In A New Generation Of Path Apps

Those who have used Path’s first two apps might be a little surprised by Kong. After all, it lacks many of those apps’ design elements — like their warm red backgrounds, user avatars, and cartoonish emoji symbols.

By comparison, Kong is bright and flashy, awash in different colors. According to Path co-founder Dustin Mierau, who was behind the design, Kong is created so that each individual user will have a different color palette when looking in the app.

The launch of Kong comes as Path seeks to re-invent itself. After four years of being most closely associated with its first, eponymous app, Path is embarking on a multi-app strategy for the future.

Co-founder and CEO Dave Morin first announced plans to roll out multiple new products with the launch of its Path Talk app last fall, and ever since the company has been working on building a number of different concepts.

Kong isn’t the first new app that the team worked on — nor will it be the last — but it was the first truly new concept that excited them enough to fully develop and launch.

How To Build A Meme Machine

The idea for the app came about as the team tried to figure out a new way to spur interaction between users taking selfies.

“Last summer we were trying to bounce around ideas and thought, ‘What’s a more meaningful way to connect people than through their faces?'” Path founder Dave Morin said. “We were fascinated with the idea of, ‘What if we created a faces-only app?'”

They started working on the idea in July, and by September had a prototype up and running. It started out as just a grid of six faces on a screen. In its earliest iterations, the images weren’t even GIFs, they were just boring old static selfies.

For previous apps, the Path team had sketched out what it wanted to build via Photoshop before going heavily into the development process. But this time around, they decided to just get a product out there in beta and iterate on it based on user feedback.

“Mobile is a challenging thing to design for,” Morin told me. “Photoshop doesn’t tell a good story of what the interactions are going to be like, so this has been a very deeply prototype-oriented process.”

The company released early versions of the Kong app to a small number of users and over the next several months let the small community help decide which features should be added, and which should be taken away. By watching how users interacted with the app and with each other, the team building Kong started to figure out what its killer features would be.

That iteration started with the addition of movement and enabling users to create GIFs through the app. But soon the concept expanded to include channels, which could be both public and private. 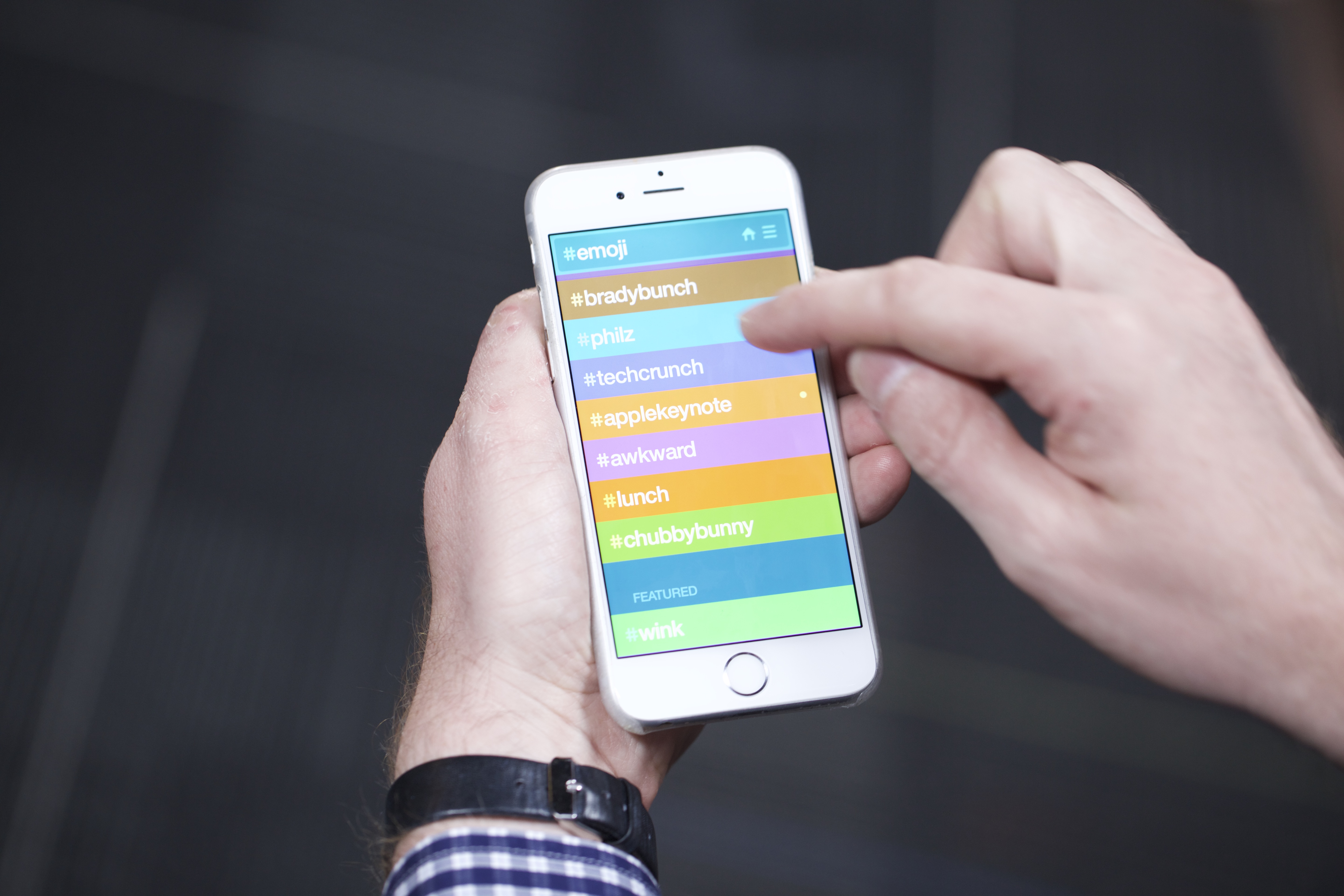 The first channel was one the Path team built for itself, as a way for employees to test out the app and play off one another. But as more users joined the beta version of the app, they spawned new channels of content around different topics and activities. Many channels soon became home to their own Kong-based memes, spurred on by a sort of call-and-response between users.

(In the Path channel, that manifest itself with employees imitating whatever Morin was doing whenever he contributed to the feed.)

The Kong team is trying to actively get people to share with a “suggested channels” feed that appears below those a user already subscribes to. Those suggestions will be updated over time to help create new memes that users might contribute to.

The hope is that channels will begin to take off on their own. Given early feedback from users who are regularly contributing, that doesn’t seem like it will be a problem. While it’s gotten some feedback while in beta, the Path team expects to learn a whole lot more once it opens the floodgates to new users.

But one thing’s certain: Path hopes to keep the app free over time. When it comes to monetizing, the company will look to partner with brands to create channels related with their products, Morin said.

That seems like a long way off, though. For now, just enjoy your new free selfie GIF creation app.