At the end of March Amazon dropped what many assumed was an early April Fools’ joke: a physical, Internet-connected button (called Amazon Dash) intended to be stuck to household items like your washing machine so you can thoughtlessly reorder staple products like washing powder without even having to open your smartphone and use an ecommerce app.

But apparently Amazon’s lazy Internet of Things product-branded buttons were bona fide, not badly timed joke. Which means — inevitably — that more of these connected bridging interfaces betwixt existing ‘dumb’ objects and the capabilities of the Internet are on the way as startups spy an (apparent) opportunity to add a physical interface to everything. (Well, at least until all objects are ‘smart’ by default and can automatically track and quantify our existence.)

To wit: Droplet, a Bluetooth button designed to stick onto your stuff and deliver configurable functionality such as reminders or custom messages. It takes the push-button ease of Amazon Dash as its jumping off point but is promising a “highly configurable” experience — whereas Amazon of course just wants to shovel more revenue into its yawning coffers. Droplet is also positioning itself as a consumer device from the get-go, vs the b2b focus of another wireless button startup, Bttn.

“Droplet helps users manage any and all tasks, whether it’s reminding, tracking, or automating internet actions,” says co-founder Sohan Japa, when asked how it compares with Amazon’s staple reordering button. “Unlike the Dash, each Droplet is highly configurable and can be assigned for many roles. Whether it is to trigger an SMS to a loved one or tracking work hours into a spreadsheet, Droplet can be tailored to the individual and its actions can be changed at any time.”

He says the Droplet button is also smaller than Dash, and designed to be “discreet and portable” — with the team suggesting use-cases such as attaching it to medicine and supplement bottles and caps as a reminder for taking pills, or lettings others know you’ve taken your pills.

Why is a hardware button reminder better than just using a reminder app? Because these custom notifications can only be dismissed by going to the physical location and pushing the button itself. Ergo, you’re more likely to actually complete the task, rather than just dismissing the notification (or that’s the theory).

Other ideas for Droplet are as chore reminders to do stuff like take out the trash, water the planets, or feed the fish. Or for tracking exercise activity (although really a wearable seems a lot better placed for that). Or tracking personal hygiene regimes. And so on.

Whatever forgetful tasks or quantifiable activities you think it would be useful to stick a tracking button on to keep tabs on — albeit the price per Droplet (which starts at $39 per button) will probably curb your enthusiasm somewhat. Each Droplet also has a limited lifespan of around a year; once the battery expires so too does the button. Natch.

The Bluetooth button requires a plug-in hub that hooks into your home Wi-Fi, and sucks up all your button-based data to Droplet’s cloud servers (so this is not a scenario privacy-conscious types will welcome), and has a companion iOS or Android app where you can configure the content and type of notifications (email, text, call etc) you want from each Droplet, and how often it should ping you. The app will also offer data visualization of your usage and routines in graph form. 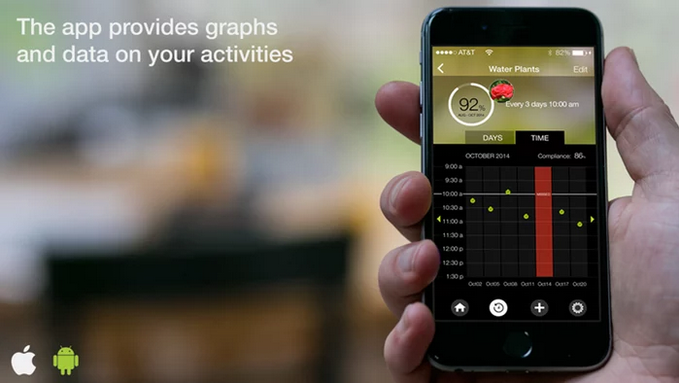 The San Francisco-based startup, which was founded back in 2013, is launching Droplet on Kickstarter today to try to raise $80,000 in crowdfunding from people willing to expand the quantity of notifications in their life (via the promise of greater utility) and turn their current (working) prototype into a shipping product, starting in December.

Droplet is not the team’s first startup. Japa was pitching a prior startup, HealthCrew, on stage at TechCrunch Disrupt NY last May. While his co-founder Joshua Newth previously worked at a medical device startup, Cardica. The team is advised by Lex Bayer, who is also a seed investor. They have otherwise been bootstrapping development up to this point.