Shipping timeframes for the Apple Watch, which went up for online pre-order a few hours ago with the promise of in-store pick up or home delivery starting on April 24, have quickly slipped to June for some models as buyers snapped up the undisclosed numbers of units Apple had ready for them.

There are a total of 38 different models of the Apple Watch up for pre-order today via Apple’s online stores in  nine countries: Australia, Canada, China, France, Germany, Hong Kong, Japan, the U.K. and the U.S.

Even the most expensive Edition line of Apple Watches is listed as shipping in June on the Apple US and Apple UK webstores. Although it’s still possible to find some models that are listed as shipping within 4-6 weeks — mostly from the mid-level priced Watch range, rather than the cheaper Sport or premium Edition line: 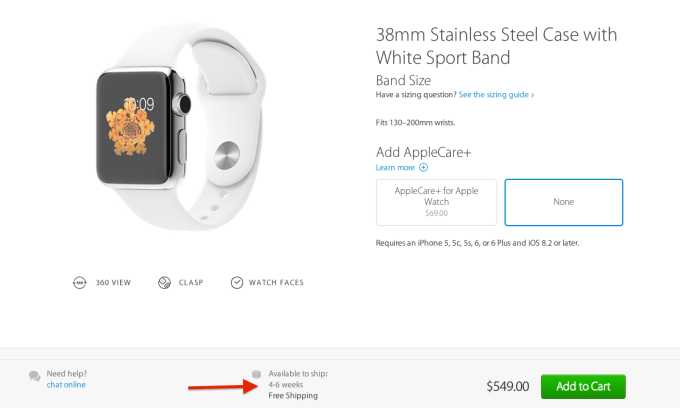 Various models on Apple’s Chinese web store are also listed with June shipping — with some of the Edition models just saying ‘not in stock’.

None of this tells us very much, given there’s no way to quantify Apple Watch demand without being able to put a concrete figure on Apple Watch supply. And therein lies the rub.

That there is some demand is evident. How much there is will have to wait for an official sales missive from Apple to find out. But if you were hoping to get your hands on Apple’s expensive wristwear this spring, chances are you’ll now be waiting til summer — unless you opt for a less popular model.

Apple confirmed it was making a smartwatch in a September 2014 event, saying the wearable would be available “early next year”.